Northern Ireland First Minister Arlene Foster has warned that the region will be in a "very difficult place" if Covid-19 rates do not fall as she announced a four-week lockdown. 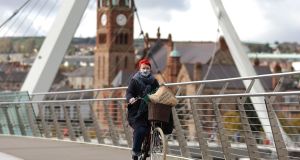 A woman cycles across the Peace Bridge over the River Foyle in Derry. The highest incidence of the disease is in the Derry and Strabane council area which over the past week saw 970 cases per 100,000 of the population. Photograph: Liam McBurney/PA Wire

There have been 1,217 new Covid-19 cases in Northern Ireland in the last 24-hour reporting period, the Department of Health there has announced.

It is the largest daily rise in cases in the North since an extended testing regime was introduced.

There were also a further four deaths reported on Wednesday, taking the toll recorded by the Department of Health to 602.

With the incidence of Covid-19 continuing to spiral upwards and with pressure on hospital beds, Ms Foster told Assembly members that the hospitality sector will shutdown for four weeks from Friday while schools will close for two weeks beginning Monday.

Takeaways and deliveries will be allowed but pubs and restaurants must close for a four-week period, said Ms Foster.

Off-licences and supermarkets will not be allowed to sell alcohol after 8pm.

Churches can remain open but attendance at weddings and civil partnerships will be limited to 25 people, and receptions will not be allowed. This will apply from Monday.

Funerals will be limited to 25 people with no gatherings before or after a service.

People will be advised not to undertake any “unnecessary travel”. No indoor sport of any kind or organised contact sports will be permitted other than at elite level.

Gyms may remain open for individual training only, while universities will be advised to provide “distance learning to the maximum extent possible”.

Ms Foster said the restrictions were designed to have two impacts. “Firstly, on the Covid transmission rates which must be turned down now, or we will be in a very difficult place very soon indeed,” she said.

“And secondly, we believe it marks a point where everyone, each and every one of us, can take stock and go back to the social distancing messaging. That is vitally important.”

Earlier, Tánaiste Leo Varadkar confirmed the Government was likely to consider increasing Covid-19 restrictions in the Border counties if the North entered a four-week lockdown.

The Northern Executive met late on Tuesday night to discuss the lockdownproposals. The Executive met briefly at about 9.30pm but then adjourned until about 11pm after the SDLP Minister for Infrastructure Nichola Mallon complained that she and Alliance leader and Minister for Justice Naomi Long were only shown the new lockdown proposals minutes before the meeting began.

There are now 150 people in Northern Ireland hospitals being treated for Covid-19, with 23 in intensive care units and 15 on ventilators. By far the highest incidence of the disease is in the Derry and Strabane council area, which over the past week saw 970 cases per 100,000 of the population.

Sources said that the North’s chief medical and science officers, Dr Michael McBride and Prof Ian Young, had recommended an imminent four- to six-week lockdown period, with a further similar lockdown in the new year. With the R number – the number of people to whom each infected person transmits the virus – between 1.3 and 1.8, Dr McBride and Prof Young urged action to bring the number below one.

They argued, according to Stormont sources, that to achieve this figure the hospitality sector should be severely restricted and/or schools closed for a period of up to six weeks. They said the R number could not be brought below one if both sectors remained fully open, the sources added.

Sources said Sinn Féin was pushing for a more stringent lockdown, while the DUP wanted schools to remain open, and also had concerns about how stricter regulations would affect the economy. - Additional reporting PA