May considers last-ditch attempt to save Brexit deal 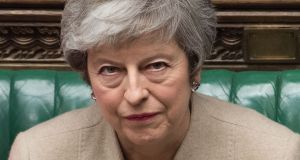 UK prime minister Theresa May is considering a last-ditch attempt to save her Brexit deal. Photograph: AFP/Getty Images

UK prime minister Theresa May is considering a last-ditch attempt to save her Brexit deal after suffering another bruising Commons defeat.

Mrs May is consulting senior ministers over the weekend on the way ahead after MPs voted on Friday to reject the Withdrawal Agreement by a majority of 58.

The Guardian reports that “May hopes to bring her Brexit deal back to parliament again next week – and appears poised to trigger a general election if parliament fails to agree a way forward”.

Following the defeat on what was supposed to be Brexit day, Labour called on Mrs May to finally accept that her deal was dead and to call a general election.

But Downing Street sources have made clear she has not given up hope of getting it through Parliament, despite having already suffered three crushing rejections by MPs.

One source pointed out that the scale of the reverse was significantly less than the previous occasions as a number of prominent Brexiteers, including Jacob Rees-Mogg, Iain Duncan Smith and Dominic Raab, fell into line.

“We continue to believe that the deal the PM has negotiated is the best outcome for the country and we will continue to seek a way forward,” the source said.

However Nigel Dodds, the deputy leader of the pro-Brexit DUP - who Mrs May had been hoping to persuade to back her deal - said he would rather remain in the EU than support it.

“I would stay in the European Union and remain rather than risk Northern Ireland’s position (in the UK). That’s how strongly I feel about the Union,” he told BBC2’s Newsnight.

In the first round of votes on Wednesday none of the eight options considered - including a customs union with the EU and a “confirmatory second” referendum - were able to command a majority.

However discussions between the various groups of MPs involved were expected to take place over the weekend to see if they could coalesce around one of the various proposals — most probably for a “softer” Brexit.

One idea being mooted at Westminster, was that if one option did emerge as a clear favourite there could be a final run-off vote with Mrs May’s deal.

Rebel Conservative Brexiteers who backed the deal on Friday did so because they feared that — with the pro-EU Commons taking control — the alternatives were either a much softer Brexit or no Brexit at all.

In Europe, however there was alarm that — with time running out — the UK was heading for a no-deal Brexit.

The result of the vote means that the Government has missed an EU deadline to secure an extension of the Brexit process and leave with a deal on May 22nd.

Mrs May now has until April 12th to go back to Brussels with new proposals and seek a longer extension to the negotiation process, or see the UK leave without a deal that day.

Taoiseach Leo Varadkar said that it was up to Mrs May to come forward with a plan to prevent that happening.

“It is not clear that the UK has fully understood that no deal is not off the agenda. Rather, it’s a growing possibility,” he said.

The German MEP Manfred Webber, an ally of Chancellor Merkel and a candidate to be the next head of the commission, said there had been “a failure of the political class in Great Britain — there’s no other way to describe it”.

In the Commons, Mrs May said the vote would have “grave” implications, and hinted at a possible general election, warning “we are reaching the limits of this process in this House”.

With a clear majority in the Commons against no-deal, she said that failure to support her plan was “almost certain” to involve an extended delay to Brexit, with the UK required to hold elections to the European Parliament in May.