Pressure mounts on May to set out timetable for resignation 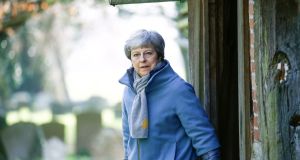 Theresa May’s cabinet will seek to agree a new strategy for Brexit on Monday amid mounting pressure on the prime minister to set out a timetable for her resignation.

Mrs May and senior ministers met leading Brexiteers, including Boris Johnson and Jacob Rees-Mogg, at Chequers on Sunday in an attempt to win support for her Brexit deal.

Earlier two cabinet ministers rumoured to be ready to replace her as prime minister offered public support to Mrs May, and said there should be no immediate change of leadership. David Lidington, Mrs May’s de facto deputy, and environment secretary Michael Gove both dismissed speculation about a possible caretaker premiership.

“I don’t think that I’ve any wish to take over from the PM who I think is doing a fantastic job. If there’s one thing that working closely with the prime minister does it’s cure you completely of any lingering shred of ambition to do that task,” Mr Lidington said.

“The PM and a number of government ministers met today at Chequers for lengthy talks with senior colleagues about delivering Brexit. The meeting discussed a range of issues, including whether there is sufficient support in the Commons to bring back a meaningful vote this week,” a Downing Street spokesman said.

MPs will vote on Monday on whether to take control of the parliamentary timetable this week to stage a series of “indicative votes” on alternatives to Mrs May’s Brexit deal.

Chancellor of the Exchequer Philip Hammond acknowledged on Sunday that if MPs reject the deal for a third time they will have to seek a cross-party majority for a different option.

“Parliament will have to come together around a proposition that can gather a majority, and what I’m hearing in parliament at the moment is lots of different ideas from different factions, but that won’t solve the problem.

“Those backbench leaders of different groups have got to get themselves together in a room and decide what they can compromise on because if parliament won’t compromise we’ll end up at the end of this process no further forward than we were at the beginning of it,” he told Sky News.

Mr Barclay described MPs’ attempt to take control of the parliamentary timetable as “constitutionally unprecedented” and a very serious risk to Brexit. He suggested that if parliament instructed the government to negotiate a softer Brexit, including customs union or single market membership, there could be a general election.

“Ultimately at its logical conclusion the risk of a general election increases because you potentially have a situation where parliament is instructing the executive to do something that is counter to what it was elected to do.”

Monday’s votes follow last week’s decision by EU leaders to extend Britain’s EU membership, which was due to end next Friday, until April 12th. If Mrs May’s deal wins parliamentary approval this week Brexit will be postponed until May 22nd to allow Westminster to pass necessary implementation legislation.

Hundreds of thousands of people demonstrated in London on Saturday demanding a second referendum, and 5 million people have signed a petition calling on parliament to cancel Brexit by revoking article 50.

Labour’s shadow Brexit secretary Keir Starmer said on Sunday that his party would demand that any Brexit deal MPs approve must be put to a confirmatory referendum before it can be implemented.