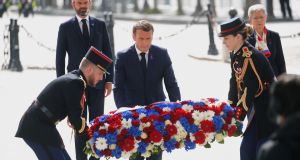 Seventy-five years ago crowds massed in the streets of Europe, singing and dancing as their leaders announced the end of six years of bloody war.

On Friday, the streets were empty, and leaders stood alone in silence at places of commemoration, as a continent marked the heroics of the war generation in the shadow of the coronavirus pandemic.

In Britain, the Prince of Wales led a two-minute silence on a unique day of reflection and celebration to mark the 75th anniversary of victory in Europe.

Along bunting-lined streets, from front doorsteps, back gardens, and living rooms, people stood with heads bowed to mark the national moment of remembrance as wreaths were laid at war memorials during small, socially distanced ceremonies.

Prince Charles and the Duchess of Cornwall paid their respects at the Balmoral War Memorial in Scotland, as a lone piper played. Charles, in highland dress, laid a wreath. The duchess, wearing the 4 Rifles dress and the regimental brooch of her father’s regiment, the 12th Royal Lancers, placed spring flowers she picked from their garden at their nearby Birkhall home.

Wreaths were also laid at Westminster on the anniversary of the day Sir Winston Churchill announced the war in Europe had come to an end after almost six years with the unconditional surrender of Nazi Germany.

Earlier, the Red Arrows streamed red, white and blue as they roared over central London, passing above The Mall, now deserted but which was to have been packed with thousands ahead of a veterans’ parade and the scene of joyful reunions with old comrades. RAF Typhoon jets performed flypasts over Edinburgh, Cardiff and Belfast at the same time. A Spitfire flypast soared over the white cliffs of Dover.

With original elaborate plans hastily rearranged because of Covid-19, the wartime generation, whom the prime minister, Boris Johnson, said had “carried the fate of freedom on their shoulders”, were confined to their homes. Crowded street parties, one of the defining images of VE Day, are banned.

But even strict social-distancing measures could not mute the mood of celebration as households across the country evoked the spirit of the 1940s, some dressing in period costume and hosting tea parties. Where possible, care homes organised sing-a-longs and festivities for residents. It may not have been the day planned, but VE Day 75 will itself become a footnote in history.

The French president, Emmanuel Macron, took part in a scaled-down version of the traditional commemorations on the Champs-Élysées, alongside his two most recent predecessors, François Hollande and Nicolas Sarkozy.

The event was observed by about 20 spectators, including the presidents of the national assembly and senate, the minister of the armed forces, Florence Parly, and Paris’s mayor, Anne Hidalgo.

During the 30-minute ceremony, Macron lay a wreath and relit the flame of the Tomb of the Unknown Soldier. A small military choir sang the national anthem, the Marseillaise.

Earlier, the French president visited and laid a wreath at the foot of a statue of General Charles de Gaulle, the leader of the Free French forces during France’s occupation and liberation.

Macron tweeted: “May 8, 1945, Victory. The flame of the Unknown Soldier is still burning for the heroes who brought us peace. 75 years later, women and men are fighting for this peace to live. For them, raise our colours high.”

At a distance of 1.5 metres, Germany’s chancellor, Angela Merkel, and the country’s president, Frank-Walter Steinmeier, came together to mark a “lonely” commemoration.

Steinmeier spoke of his sadness that representatives of the allies and thousands of young people were unable to join the two German leaders to lay a wreath at the Neue Wache in Berlin, the country’s main memorial to the victims of the war and the Nazi dictatorship.

“Perhaps this being alone will take us back to May 8th, 1945, because at that time the Germans were actually alone ... defeated militarily, politically and economically – morally shattered. We had made ourselves the enemy of the whole world,” Steinmeier said.

The president said that while May 8th is known today in Germany as Liberation Day, three-quarters of a century ago, “it was far from being that in the minds and hearts of most Germans”.

Steinmeier thanked “all those in the world who gave this country the chance to start again”. He warned against the “the temptation of a new nationalism”.

“For us Germans, ‘never again’ means ‘never again alone’,” he said. “We want more, not less, co-operation in the world – also in the fight against the pandemic.”

Earlier, the Bundestag leader of the far-right AfD party, Alexander Gauland, criticised the city of Berlin for making May 8th a one-off public holiday on what he described as a “day of complete defeat” for Germany. – Guardian

1 Ireland among countries urged to consider reinstating restrictions
2 Sinn Féin apologises as member resigns over social media abuse
3 Trump evacuated from briefing after shooting near White House
4 ‘We feel we are in limbo’: Wedding plans in chaos due to Covid-19
5 O’Doherty ‘trying to evade’ service of defamation proceedings, court hears
Real news has value SUBSCRIBE