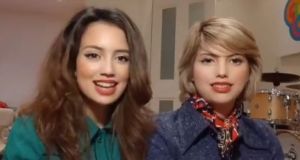 Alice Grant (17), left, with Beatrice Grant (16): ‘We received a lot of backlash for the video but also a lot of nice comments and support.’ Photograph: Twitter/Turning Point UK

A pair of pro-Brexit teenage siblings who have gained notoriety over the past week after posting a video urging the Republic of Ireland to follow the UK out of the European Union say they are planning a follow-up video to support the case for Irexit.

The video referred to commonalities between Ireland and Britain, including shared DNA, tastes in food, language, weather and island status, as motivation for an Irish vote to exit the EU.

It ended with a call for Ireland to “stand up against the establishment to join the peaceful, political revolution to regain your independence and your freedom”.

Viewers on Twitter, particularly those in Ireland, were unconvinced by the argument, with politer comments claiming that the sisters “don’t have a clue about Ireland or its history” and were “incredibly patronising”.

Unfazed by the backlash, Alice Grant (17) said she and her 16-year-old sister were “making a part two”. The second video will “raise awareness of all the humiliation that Ireland has been through from being part of the EU.”

Asked to elaborate, she claimed that Ireland paid €1 billion a year to the European Union, that Ireland “has given up 200 miles of coastline to the EU” and that the euro “isn’t working” for Ireland, although she admitted also “the pound doesn’t appear to be doing too well [at the moment]”.

Grant said “we received a lot of backlash for the video but also a lot of nice comments and support”.

She said she and her sister were “by no means experts on the subject” but “the message just came from the heart”, adding that they have “Irish blood” in their family. “My great-grandfather on my father’s side was Irish.”

Polls show public support for Irexit is low, with 25 per cent believing Ireland would be better off outside of the EU in the most recent EU barometer. In the 2017 poll on pro-European sentiment, Irish voters ranked seventh most in favour of the EU across Europe.

Discussing the controversial backstop, the original video blames the EU for “blow[ing] out of proportion this issue merely about the transportation of goods over the Border, while forgetting the goodwill, peace and prosperity brought to us by the Good Friday Agreement”.

Grant adds that “the Taoiseach [should have] worked things out with Britain instead of weaponising the Border issue”.

When asked to offer an alternative, Grant suggested that “technological agreements to track goods”, could avoid a hard border, adding “I haven’t worked out all of the details but I know there is a way”.

She told The Irish Times she was “expecting and hoping for no deal”, a result that “would possibly cause a bit of harm when it comes to Ireland”.

However, she claimed any economic damage to Ireland and the UK would be outweighed by “a great future as independent nation states”.

The sisters say they initially became interested in Brexit when they saw videos of Nigel Farage in the European Parliament on YouTube. The pair gained widespread media attention when they were filmed alongside Mr Farage and other Brexit protesters marching from Sunderland to London in March 2019.

They have since been heavily involved in pro-Brexit campaign group Leave Means Leave, and have gained significant Twitter followings from writing and making their own videos.

The sisters are aware their views put them in a minority among their peers – 70 per cent of 18-24-year-olds who voted in the 2016 referendum backed Remain.

Alice Grant, who is currently taking her A-levels at a London private school, said she didn’t blame young people for supporting Remain.

“It’s because of the sheer amount of propaganda, coming from the political class and media like you. It’s definitely worked for a lot of my generation. Living in London, we are controlled by the global, corporate class.”

Keen to emphasise her own independence, she said the next video on Ireland would not be published through Turning Point. “It would be nice to post it ourselves.”