Army on standby to roll out jabs from start of December, says British health secretary 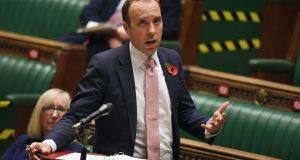 Asked whether a vaccine could be available by Christmas, British health secretary Matt Hancock said that was ‘absolutely a possibility’. Photograph: Jessica Taylor/UK Parliament/EPA

The UK reported a further 532 coronavirus-related deaths on Tuesday, its highest daily figure since May.

The British government said that, as of 9am on Tuesday, there had been a further 20,412 lab-confirmed cases of coronavirus in the UK, while 532 more people had died within 28 days of testing positive for Covid-19.

The stark figures came as health secretary Matt Hancock said people in the UK were likely to be among the first in the world to receive a coronavirus jab.

The UK’s medicines regulator could approve the Pfizer or Oxford jabs within days of a licence application being submitted due to rolling analysis of the data, according to Mr Hancock.

He told MPs in the Commons the focus was on delivering the vaccines from Oxford and Pfizer if they pass safety tests and are approved by regulators, with a further vaccine possibly coming next summer.

He said: “It is next summer before the next vaccine candidate comes on stream, and so the focus of the roll-out plan at the moment is on delivering the Pfizer and the AstraZeneca projects if they pass the safety tests.”

Earlier, Mr Hancock said the military and NHS staff were on standby to roll out a Covid-19 vaccine across the UK from the start of December and would work “seven days a week”, with GPs, new vaccination centres and pharmacists all playing a role.

Pop-up vaccination clinics are also expected to be used in some areas.

Mr Hancock said there were many hurdles to overcome before the “vast task” of vaccination could begin, including thorough examination of clinical trial data.

But he said the NHS was leading the work to get a vaccine to those most in need as soon as possible, including the elderly and health and care staff, though most other people will not get a jab until 2021.

Experts hope that the first phase of vaccination of priority groups could prevent the vast majority of deaths from Covid-19.

Asked whether a vaccine could be available by Christmas, Mr Hancock said that was “absolutely a possibility”, adding that vaccination clinics would be open on bank holidays and weekends.

Data on the vaccine from Oxford University and AstraZeneca is just weeks away, with Sir John Bell, who is part of the Oxford team, saying he expects two or three to be available by the new year.

He told BBC Radio 4’s Today programme: “The MHRA, which is one of the best medical regulators in the world, they’ve been working closely with the companies – with Pfizer and AstraZeneca – so that they’ve been looking at the data all the way through in what’s called a rolling review.

“[This is] rather than waiting, as is normal, for the end of the process, for all the data to be then handed over for them to start looking at it.

“So that means that the regulator will be able to make a judgment on whether this is clinically safe, and not just take the company’s word for it, but do that within a matter of days from a formal licence application.”

Mr Hancock said Oxford’s vaccine was easier to deploy than Pfizer’s, which needs to be kept at a temperature of minus 70 degrees.

Pfizer’s vaccine is also being manufactured in Belgium, he said, but a lot of work had been carried out to deploy any vaccines as soon as they become available.

“We’ll be among the first countries in the world to be able to start to do this,” he said.

“We may end up being right at the start of that.”

The UK government has ordered 40 million doses of the Pfizer vaccine – enough for about a third of the UK population.

It expects 10 million of these doses to arrive in the UK before the end of this year, with people given two doses, 21 days apart.

Mr Hancock said that once a vaccine becomes available, it will be delivered through care homes, GPs and pharmacists, as well as “go-to” vaccination centres set up in venues such as sports halls.

“We will be working across the NHS with the support of the armed forces seven days a week, over weekends, over bank holidays, to get this rolled out into people’s arms as quickly as possible,” he told BBC Breakfast.

He added that children would not need to have the vaccine and it would be voluntary for adults.

However, he later told MPs it was not yet known what proportion of the population would need to be vaccinated to stop the epidemic.

While the vaccine could protect individuals, data on population transmission only came after a significant number of people had been vaccinated, he said”. – PA