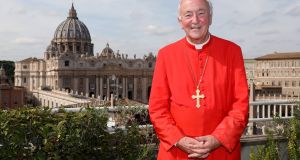 The report was particularly critical of Archbishop of Westminster Cardinal Vincent Nichols who, it noted, had failed to ‘acknowledge any personal responsibility or show compassion for victims in the recent cases we examined’. File photograph: Getty

Two reports published on Tuesday, one by the Vatican and another in the UK, have further undermined the Catholic Church’s credibility in its handling of clerical child-sexual abuse allegations.

The Independent Inquiry into Child Sexual Abuse (IICSA) in the Catholic Church of England and Wales found that the church “prioritised its own reputation over the welfare of vulnerable children for decades”.

The church’s “moral purpose has been betrayed by those who sexually abused children, as well as those who turned a blind eye and failed to take action against perpetrators”, it said.

In Rome a Vatican report into how former cardinal and archbishop of Washington Theodore McCarrick (90) was elevated by Pope John Paul in 2000, despite credible abuse allegations against him, found the decision followed a letter to the late pope from McCarrick denying all allegations.

The report also found that bishops, cardinals as well as Pope John Paul II and Emeritus Pope Benedict XVI downplayed or dismissed reports that McCarrick had slept with seminarians. Where Pope Francis was concerned, it found he had continued a similar approach to McCarrick until a former altar boy alleged abuse.

In 2018, based on the latter credible allegations, Pope Francis removed McCarrick from public ministry and he resigned from the College of Cardinals in July of that year. In February of last year McCarrick was removed from the Catholic priesthood after being found guilty of abuse by a church inquiry.

The IICSA report in the UK found that between 1970 and 2015, the Catholic Church received more than 900 complaints involving more than 3,000 instances of child-sexual abuse in England and Wales. Since 2016, there have been more than 100 reported allegations each year.

The true scale of abuse in the church in both countries over the last 50 years “is likely to have been far higher”, it said.

The church “repeatedly failed to support victims and survivors, while taking positive action to protect alleged perpetrators”, it said. Its “senior leaders have been resistant to external oversight and have only partially implemented the recommendations” of previous independent reviews.

The report was particularly critical of Archbishop of Westminster Cardinal Vincent Nichols, the most senior Catholic leader in England and Wales. He had failed to “acknowledge any personal responsibility or show compassion for victims in the recent cases we examined”, it said.

The cardinal “has shown he cares more about the impact of child sexual abuse on the Catholic Church’s reputation than on victims and survivors”, the report stated.

Where Rome was concerned, and as with statutory abuse inquiries in Ireland, the IICSA report noted “the Holy See and the Apostolic Nuncio, its ambassador to the UK, did not provide a witness statement to this Inquiry despite repeated requests”.

The report stated that it could not understand this “lack of co-operation” and concluded it stood “in direct contrast with Pope Francis’s public statement on child sexual abuse in 2019, calling for ‘concrete and effective actions that involve everyone in the Church’ ”.