‘Whether you are a Remainer or Leaver, no one can welcome chaos’, ex-PM says 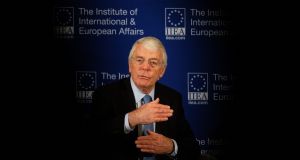 Former British prime minister John Major has called for Brexit to be halted to create time to find a way through the United Kingdom’s political crisis.

Speaking in Dublin, Mr Major said that the UK needed to revoke its article 50 application to withdraw from the European Union “with immediate effect.”

“Whether you are a Remainer or Leaver, no one can welcome chaos,” he said in a speech to the Institute of International and European Affairs in Dublin, referring to the political divisions in London over the proposed Brexit deal.

The former Conservative leader said there was a need to calm the markets and protect the economic wellbeing of the British people and the national interest.

“There is no shred of doubt in my mind that to do so we now need to revoke article 50 with immediate effect,” he said.

“The clock, for the moment, must be stopped. It’s clear that we now need the most precious commodity of all: time.”

Mr Major, who was prime minister from 1990 to 1997, said that this was a time “for serious and profound reflection by both parliament and the people.

“There will be a way through the present morass; there always is. But in our national interest we now need to take some time to find it and I hope and I trust that we will.”

He said he thought the “wiggle room” to find a compromise in the Brexit deal was “probably very limited” but he saw more flexibility in the political declaration setting out the future EU-UK relationship.

“I can certainly see things that could be changed in the political declaration that would be helpful. Whether they would be significantly helpful, I don’t know,” he said in answer to a question from The Irish Times after his speech.

He suspected that if British prime minister Theresa May asked for changes to the political declaration, she “may actually get some.”

There were “at least two” changes that could be made to the withdrawal agreement that “could make a significant difference” to find majority support in the UK parliament but declined to say what they were.

“There is scope in the withdrawal agreement but I don’t think that scope will be exercised because I think Europe has boxed itself in to saying, ‘a deal is a deal and it is unchangeable,’” he said.

Mr Major said he did not favour Mrs May being replaced; an election for a new Conservative leader “might manage to be one of those things that could make matters worse.”

He also did not see any potential replacement for her who might have a new way of looking at Brexit. He criticised some of the hardliners in her own party and the positions they have demanded.

“I am not sure that I immediately see a figure who has the fresh idea. The people who have pushed the prime minister into a particular position time after time after time now complain at the position she is now in,” he said.

“I think if they wish to see the cause for that, I think many of them would do very well to look in the mirror and reflect on what they said a few months ago.”

Mr Major warned about the potential for a return to violence if a hard Irish border returns.

“The belief that because we have no violence in Northern Ireland for 18 years that it is gone forever is fatuous. Peace is never definitively forever. Things can go wrong,” he said.

There were people on both sides of the national and unionist divide who would be “only too please to disrupt the harmony that Northern Ireland has enjoyed for the last 18 years.”

“We must do nothing to give them the opportunity of doing it and the imposition of a hard border is an opportunity for them to do it,” he said.

Asked whether Brexit might lead to a united Ireland or two-state confederation of Ireland, Mr Major said that a united Ireland was “quite an expensive proposition” and this “may not be foremost in everyone’s mind all the time.”

Creating North-South harmony and the “freest flowing trade and life” between the Irish north and south of the Border was “more important than changing the map a little to incorporate the North back within the South,” he said.