The European Union is willing to give Britain further clarifications on its Brexit deal but will not renegotiate the treaty or its protocol on the Irish border, EU chief executive Jean-Claude Juncker said on Tuesday (December 11). 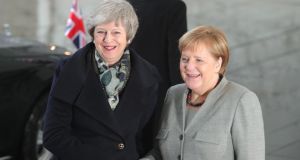 Theresa May (L) shakes hands with Angela Merkel ahead of talks at the Chancellery in Berlin on Tuesday. Photographer: Krisztian Bocsi/Bloomberg

British prime minister Theresa May will travel to Dublin on Wednesday as her efforts to save her floundering Brexit deal continue.

Having postponed a House of Commons vote on the withdrawl agreement, with defeat appearing certain, Mrs May began a tour of European captials on Tuesday which appears unlikley to yield the concessions shes is seeking on the Northern Ireland backstop.

The backstop, an insurance policy included in the agreement to ensure that there is no hard border in Ireland in the event of the UK departing the EU without a deal, is the main sticking point for MPs at Westminster.

The EU has been clear that it will give “clarifications” on aspects of the withdrawal agreement but will not countenance reopening the deal.

“The deal we achieved is the best possible. It’s the only deal possible. There is no room whatsoever for renegotiation,” European Commission president Jean-Claude Juncker said in an address to the European Parliament in Strasbourg.

The British parliament will vote on a deal before January 21st, Mrs May’s spokeswoman said. If there is no satisfactory deal by then, parliament will still be given a debate on the issue.

Mrs May called on Tuesday called on German chancellor Angela Merkel in Berlin and Dutch prime minister Mark Rutte in the Hague in an attempt to win some concessions. She was also due to meet Mr Juncker and European Council president Donald Tusk later to seek assurances and ways to give British politicians powers over the Irish backstop.

She is to meet Taoiseach Leo Varadkar in Dublin late on Wednesday ahead of an EU summit on Thursday and Friday at which the Brexit withdrawal agreement is likely to dominate the agenda.

I will meet @theresa_may this evening in Brussels. I remain convinced that the #Brexit deal we have is the best - and only - deal possible. There is no room for renegotiation, but further clarifications are possible.

With less than four months until the UK is due to leave the EU on March 29th, Mrs May has warned British MPs that if they reject her deal then the only other options were a disorderly no-deal divorce, or a reversal of Brexit that would defy the will of those who voted for it.

Mrs May’s critics say the backstop, which keeps the UK in the EU customs union in the absence of a better way to avoid border checks, could leave Britain subject to EU rules indefinitely.

Mr Juncker said neither side intended for the backstop ever to take effect, but it had to be part of the deal to protect the Belfast Agreement.

Minister for Foreign Affairs Simon Coveney addressed the Cabinet on Tuesday on contingency plans being worked on in the event of a no-deal Brexit.

Mr Coveney said that while the UK leaving without a deal was unlikely, the Government has to be prepared. Speaking on RTÉ’s Morning Ireland, he said the EU had made it very clear the backstop is not going to change.

Mr Coveney said the DUP had changed the backstop “into something that it isn’t, they’ve created fear. There is no threat to the sovereignty of Northern Ireland”.

He said Mrs May understands the fragility of the peace process and that backstop is not something to be feared. There was no ulterior motive and it is consistent with the promises to the people “of this island”, he added.

“If we can’t go forwards with her deal . . . then I’m afraid the only way to change the policy is to change the prime minister and I really think it’s her duty to go,” Brexit-supporting MP Steve Baker said.

A leadership challenge is triggered if 48 Conservatives write letters demanding one to the chairman of the party’s so-called 1922 committee, Graham Brady.

Mrs May’s decsion to pull the parliamentary vote on the deal the day before it was due to take place promped ridicule, calls for an election and blunt warnings that her effort to win changes to the deal would be in vain.

She said the deeper question was whether lawmakers wanted to deliver on the people’s will expressed in a 2016 referendum, or open up divisions with another national vote.