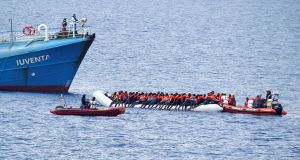 Humanitarian organisation Médecins Sans Frontières (MSF) has decided to suspend its search and rescue operations in the Mediterranean following threats from the Libyan coastguard.

MSF said on Saturday that it would withdraw the Prudence search and rescue ship which has been instrumental in saving the lives of asylum seekers trying to reach Europe by crossing the Mediterranean.

It’s decision follows the announcement that Libyan authorities plans to restrict the access of humanitarian vessels in international waters off the coast of Libya.

The Italian Maritime Rescue Coordination Centre in Rome has warned MSF of the security risk to their staff following public threats from the Libyan Coast Guard against humanitarian search and rescue vessels operating in nearby international waters.

“If these declarations are confirmed and the orders are implemented we see two grave consequences - there will be more deaths at sea and more people trapped in Libya,” said Annemarie Loof, MSF’s operational manager.

“If humanitarian ships are pushed out of the Mediterranean, there will be fewer ships in the area to rescue people from drowning.

“Those who will not drown will be intercepted and brought back to Libya, which we know is a place of lawlessness, arbitrary detention and extreme violence.”

Last week the Italian Navy announced that it would be deployed inside Libyan waters to help increase the capacity of Libyan coastguard to intercept migrant and refugees and send them back to Libya.

However, MSF is calling on the Libyan authorities to respect their “legal obligation” to rescue vessels in distress, both in international and Libyan waters.

A total of 96,853 asylum seekers have arrived in Italy by crossing the Mediterranean so far this year, according to the most up-to-date statistics from the UN Refugee Agency.

The vast majority of these people set sail from Libya where there have been reports of severe human rights abuses and torture in detention centres. So far in 2017, a total of 118,523 men, women and children have crossed the sea to reach Spain, Italy, Greece and Cyprus.

Last month, an Irish doctor working with MSF in the Mediterranean called on Irish naval vessels carrying out search and rescue operations not to support efforts to return refugees and migrants to these Libyan detention centres.

Speaking at an Oireachtas committee hearing in July, Dr Conor Kenny spoke of the torture and hard labour endured by refugees and migrants stuck in Libya.

“They often speak about the abuse they have suffered at the hands of smugglers, armed groups and private individuals.

“Many tell us stories of how they were bought and sold as a commodity. It appears to be a place of extreme danger with no rule of law,” said Dr Kenny.

“Ireland needs to know that returning people to Libya is simply not an option.”

Meanwhile, Italy has expressed fears that charity rescue boats are facilitating people smuggling and has proposed a code of conduct governing how they operate. Some groups, including MSF, have refused to sign the code.

They object to a requirement that Italian police officers be on their boats and that the boats must take migrants to a safe port themselves, rather than transferring them to other vessels to allow smaller boats to stay in the area for further rescues.

MSF operates one rescue ship in the Mediterranean, the Vox Prudence, currently docked in the Sicilian port of Catania.

The charity will continue its collaboration with another aid group, SOS Mediterranee, which operates a rescue ship in the Mediterranean with MSF doctors on board.