Danish queen’s husband objects to being buried with her 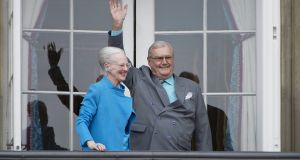 Prince Henrik of Denmark announced on Thursday he does not wish to be buried next to his wife, Queen Margrethe II, saying he is unhappy he was never acknowledged as her equal.

Henrik (83), who married Queen Margrethe in 1967, was given the title of the queen’s prince consort, but has repeatedly said through the years that he would have liked to have been named king consort.

“It is no secret that the prince for many years has been unhappy with his role and the title he has been awarded in the Danish monarchy. This discontent has grown more and more in recent years,” the Royal Danish House’s director of communications told tabloid BT.

“For the prince, the decision not to buried beside the queen is the natural consequence of not having been treated equally to his spouse - by not having the title and role he has desired,” the director of communications added.

The royal house confirmed the quotes to Reuters.

Since then, he has participated in very few official duties and instead spent much of his time at his private vineyard in France, although he is still married to the queen and they officially live together.

In Denmark, a princess traditionally becomes queen when her husband takes the throne.

It had been expected that the prince would be buried next to the queen (77), who is to be interred in the Roskilde Cathedral in a sarcophagus made by Danish artist Bjorn Norgaard.