MPs to vote on revised version of withdrawal agreement bill 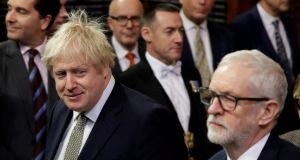 MPs will vote on Friday on a revised version of the withdrawal agreement bill that strips out guarantees on workers’ rights and removes any role for parliament in shaping Britain’s future relationship with the EU.

The bill makes no changes to the withdrawal agreement British prime minister Boris Johnson agreed with the EU last October, including the protocol that ensures that Northern Ireland will continue to observe EU regulations and customs rules after Brexit.

Revisions to the bill mean that ministers will not have to update parliament on the progress of trade talks with the EU, although they will report annually on disputes with Brussels, and MPs will not have to approve the government’s negotiating objectives.

The bill prohibits the government from extending the post-Brexit transition period beyond December 2020.

“After years of delay and rancour in parliament we will deliver certainty, and hard-working businesses and people across this country will have a firm foundation on which to plan for the future,” Mr Johnson said ahead of Friday’s debate on the bill.

“Next year will be a great year for our country – the year we get Brexit done, boost NHS funding, invest in infrastructure and level up access to opportunity and prosperity across our great nation.

“It will mark the start of a new decade where the United Kingdom will champion trade, innovation and science, and meet global challenges with old friends and new across the world.”

Labour’s shadow Brexit secretary Keir Starmer criticised the government for dropping a provision in the bill that would commit Britain to seek an agreement with the EU to accept unaccompanied child refugees.

“During the last parliament Labour’s Alf Dubs led the campaign to protect child refugees post-Brexit. The Tories now want to tear up those protections. As we leave the European Union we cannot abandon our values of human rights and internationalism. Labour must continue to stand up for the most vulnerable people in the world,” Sir Keir said.

The Queen’s Speech setting out the government’s legislative agenda on Thursday included proposals on employment rights, including a right for workers “to request a more predictable contract” and an entitlement to one week’s leave for unpaid carers.

In Edinburgh on Thursday, Scotland’s first minister Nicola Sturgeon set out her case for Westminster to transfer to the Scottish parliament the authority to call a second independence referendum.

Such a referendum currently requires the authorisation of both parliaments, and Mr Johnson has ruled out agreeing to it.

“In a voluntary association of nations such as the UK it cannot be in the interest of any part for our right to choose our own future to be conditional, or time limited, or a one-off,” she said.

“Scotland made clear last week that it doesn’t want a Tory government, led by Boris Johnson, taking us out of Europe and down a path we haven’t chosen. But that is the future we face if we don’t have the opportunity to consider the alternative of independence.”