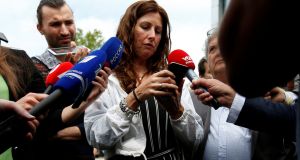 Five years after the shooting down of Malaysia Airlines Flight MH17 over eastern Ukraine, Dutch prosecutors have issued international arrest warrants for four men – three Russians and a Ukrainian – who are to face charges of murdering its 298 passengers and crew.

After “one of the most complex criminal investigations ever conducted”, the four – three of them with links to Russia’s security services – are to be tried by a court in the Netherlands, starting on March 9th next year. It was an announcement welcomed immediately by the relatives of those killed.

Although he urged the four suspects to be present for the case, chief prosecutor Fred Westerbeke said he would not be asking Russia or Ukraine to extradite them because neither country operates an extradition system.

He said he would, however, ask the Russian and Ukrainian authorities to deliver summonses to the men so that they would be aware of the proceedings. However, the likelihood is that they will be tried in absentia in a case that, given its technical complexity, could last for some time.

Igor Girkin, a former colonel with the Russian intelligence service FSB, was also minister for defence of the self-styled DNR and overall commander of its forces when MH17 was shot down en route from Amsterdam to Kuala Lumpur on July 17th, 2014.

Sergey Dubinskiy, a member of the Russian military intelligence agency, the GRU, was head of intelligence of the DNR, and deputy to Mr Girkin.

Oleg Pulatov, a former special forces soldier with the GRU’s Spetsnaz unit, which has undergone a renaissance since Vladimir Putin became president, was Mr Dubinskiy’s deputy head of intelligence.

The only Ukrainian, Leonid Kharchenko, was commander of the DNR combat unit on the ground in the Donetsk region – and answerable to the other three.

Through this chain of command, said Fred Westerbeke, the Donetsk separatists obtained heavy equipment from Russia, including the BUK missile system which was used against MH17 “with such terrible consequences”.

Under Dutch law, he told a press conference organised by the Joint Investigation Team (JIT) – comprising Malaysia, the Netherlands, Belgium, Australia and Ukraine – those who planned a crime, even if they weren’t present at its execution, were as liable as those who were.

“The possibility also exists that they wanted to shoot down a Ukrainian military aircraft and not a passenger aircraft. However, we still hold them responsible. What they knew, what they wanted, or what they did, can only be finally established by the court.”

Igor Girkin, speaking to a Russian news agency, maintained that “separatist forces did not bring down the Boeing”.

Kremlin spokesman Dmitri Peskov responded by complaining that Russia – which has denied all involvement in the downing of MH17 – had had “no opportunity to take part” in the JIT investigation.