Cliff Taylor: It is unclear how Theresa May can navigate the next phase of talks 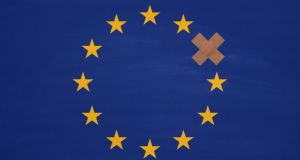 Border argument: the sticking plaster was applied to this circular loop in December. Photograph: iStock/Getty

The sticking plaster that was placed over the Irish Border question in the December deal which allowed the Brexit talks to progress is about to be slowly prised off. As a microcosm of the difficulties to be faced as the talks get down and dirty – to use the Taoiseach’s phrase – it is just about perfect.

What we got in phase one was a fudge, albeit one that was a diplomatic victory for Ireland as it gives us something to base our arguments on. Now Ireland will try to get it tied down in the text of a formal legal withdrawal agreement between the EU and the UK, now being negotiated.

But there are still big dangers here for Ireland. Under pressure from the “Brexit means Brexit” lobby, Theresa May continues to insist that the UK will leave the EU trading bloc. If it does so there is no clear way to avoid the return of an Irish trade border.

It had seemed after the December deal that the odds were rising on a softer Brexit. But British politics has now intervened. This could quickly get messy. With rumblings now of a leadership challenge to May from the pro-Brexit lobby, who fear her approach is too “timid”, it is not clear how she can successfully navigate the talks ahead.

If she can’t face this lobby down then the talks with the EU could fail, and the UK could crash out of the EU without a deal.

It looks like May and her government had hoped to get to the autumn and an exit deal by continuing to fudge the key issues of what they wanted the future relationship to look like. This may not now be possible.

On Monday, EU foreign ministers are due to formally accept the European Commission’s negotiating mandate for the next phase of the Brexit talks. This is about the transition deal which will apply after Britain leaves the EU and before new arrangements for its future relationship with the EU are finalised.

This will be the next test for May. The UK had seemed to be edging towards acceptance that it needed a transition deal – and that this would involve the status quo remaining more or less in place. This means the UK continuing to make contributions to the EU budget and remaining subject to the European courts.

But Brexiteers are suspicious. The UK could end up as a “vassal state” for the transition period, warned MP Jacob Rees Mogg during the week, subject to EU courts on which it had no judge and new EU rules into which it had no input. Yet this is the only option the UK faces if it wants a transition deal.

Moving beyond the transition phase into how things will work in the future, the Border highlights the central conundrum. The UK says it wants to have free trade on its own terms both with the EU and the rest of the world. The EU is saying, in reply, that you can only have free access to EU markets if you play by EU rules.

And here we come back into the circular loop that is the Border argument – the bit where the sticking plaster was applied in December.

If the UK leaves the EU trading bloc – the customs union and the single market – then it gets very difficult to avoid the return of a border on the island of Ireland.

The UK could agree a new customs union with the EU, or have a Norway-style arrangement where it remains in the single market – and even with these there would be more work needed to avoid an Irish trade border.

But Rees Mogg and the “Brexit means Brexit “ lobby want a “clean break”. And a clean break means some kind of border between the UK and the EU’s single market. And, on the DUP’s insistence, the UK government has ruled out new trade borders between the North and the UK.

Little surprise, then, that in Davos this week Taoiseach Leo Varadkar spoke about the importance of the December agreement being reflected in the formal legal exit deal. Ireland is looking for something enforceable to avoid the return of the Border.

And in the meantime the December deal is being parsed. The UK promised to avoid the return of a “hard border”. What exactly does this mean? The agreement says that if a new EU/UK trading deal or other specific solutions do not solve the Border problem, then the UK will maintain “full alignment with (the) rules of the internal market and the customs union”. The UK is already hinting that this means alignment of rules only in certain sectors – such as agriculture and energy – and not across the board.

Ireland’s immediate concern now will be twofold. One is that the talks could collapse, leading to the economic chaos of a hard Brexit.

The other is that unless the UK relents pretty much completely there is no clean solution to the Border issue. And Ireland does not want to end up with some Heath Robinson solution and a half-baked Border.

There will also be some concern that the fulsome EU support for our position on the Border could be diluted as other priorities raise their head.

With the rumblings of a leadership challenge in the Conservative party and May under pressure, hopes of a soft Brexit and a Border solution are under threat. This is the swamp we are now stepping into.

Phase one of the talks was only a gentle warm-up for what is to come.