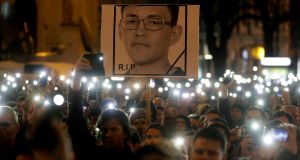 Slovak police have charged a man with ordering the murder last year of investigative journalist Jan Kuciak, marking a major breakthrough in a case that sparked nationwide protests and the resignation of senior officials.

Prosecutors named the suspect as “Marian K” and leading local media identified him as Marian Kocner, a multimillionaire businessman who allegedly threatened Kuciak several months before he was killed. Mr Kocner has previously denied making threats or having any role in the double murder.

Kuciak and his fiancee Martina Kusnirova were shot dead at his house in the village of Velka Matca, 50km east of the Slovak capital, Bratislava, on February 21st, 2018. They were both 27 and had planned to marry last May.

In his final investigation, published posthumously, Kuciak revealed links between political associates of Slovakia’s then prime minister, Robert Fico, and an Italian businessman with suspected ties to the Calabrian Mafia.

The murders fed simmering anger over alleged connections between politicians and shady businessmen in Slovakia, triggering the biggest rallies seen in its towns and cities since Czechoslovakia’s 1989 Velvet Revolution, and forcing Mr Fico, his interior minister and a chief of police to step down.

Four people were charged last year over the killings, including a former policeman who allegedly shot the couple; an ex-soldier suspected of acting as a getaway driver; and a woman who is accused of asking an intermediary to organise Kuciak’s murder for a total fee of €70,000.

Many Slovaks had feared, however, that whoever ultimately ordered and funded the killings could use his wealth, influence and connections to evade justice.

The breakthrough in the case was made public two days before the first round of presidential elections, in which an opposition, anti-graft candidate is set to beat the politician backed by Slovakia’s ruling Smer party, which Mr Fico still leads.

“The motive for the murder was the victim’s [journalistic] work,” a prosecutor working on the case told local media on Thursday, while revealing that at least one suspect was giving information to investigators.

“We believe the evidence has such procedural value and weight that it is justified to make this allegation. One person’s testimony is never enough on its own to make it possible to press charges,” the prosecutor added.

The “For a Decent Slovakia” group, which led protests demanding justice and an end to graft and impunity, said the support of civil society had helped investigators work without political pressure.

“Given Kocner’s acquaintance with politicians and oligarchs, we must all be alert to any attempt by politicians to interfere in the investigation,” the group warned.

Interior minister Denisa Sakova, meanwhile, said police progress on the case disproved government critics’ claims that it “would never be investigated or would be swept under the carpet”.