Taoiseach Leo Varadkar has said that the Irish Government "profoundly regrets" the House of Commons vote on the Brexit bill. 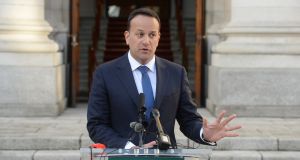 Taoiseach Leo Varadkar said if the UK moved on its red lines of ruling out membership of the customs union and single market, the EU position would also evolve. Photograph: Dara Mac Donaill

The Government cannot shift on the issue of avoiding a hard border on the island of Ireland after Brexit, Taoiseach Leo Varadkar has said.

Mr Varadkar, speaking at Government Buildings on Wednesday morning in response the rejection by the House of Commons of British prime minister Theresa May’s Brexit withdrawal agreement on Tuesday night, said the Irish and British governments had made a promise to avoid a hard border.

“We can’t shift on the issue of there being no hard border between Ireland and Northern Ireland,” Mr Varadkar said.

“That is the outcome that we need. We have said it from day one that Brexit cannot result in a hard border between Ireland and Northern Ireland. We have made that commitment to the people of Ireland, north and south.

The Taoiseach repeated that the UK must now decide what type of post-Brexit relationship it wants with the EU.

“What is required here is for Britain to essentially decide what kind of Brexit it wants.”

He also rejected the idea of a time limit on the backstop, the insurance policy to avoid a hard border.

“A guarantee with a time-limited is not a guarantee. What we are trying to achieve here is a guarantee that there be no hard border between Ireland and Northern Ireland.

“There were two votes last night. One of the votes was on accepting the withdrawal agreement with a time-limited or deleted backstop and only 25 MPs voted for that.”

Mr Varadkar said if the UK moved on its red lines of ruling out membership of the customs union and single market, the EU position would also evolve.

“We have also always said that the risk of an unplanned, disorderly Brexit at the end of March can be avoided, including if necessary by an extension of the Article 50 deadline. This would be subject to a request from the UK being made, and agreed by all Member States.”

He also said the Government “profoundly regrets the decision of the House of Commons to reject the withdrawal agreement between the EU and UK and the associated joint political declaration”.

He added: “It is not the outcome we wanted. Over the coming weeks, the Government will continue to work with our European partners in a collective effort to conclude an agreement with the UK. The deal provides a guarantee that a hard border will be avoided, and that citizens’ rights and freedoms will be protected.

Mr Varadkar said the Government’s plans for a no deal Brexit will continue.

“These are no longer contingency plans. They are being implemented by the Government. Now businesses and other organisations must do the same.

“For Government, this involves legislation including the omnibus Brexit bill, preparations at our ports and airports for customs and SPS checks, contingency plans to ensure medicine supplies are not interrupted, and further plans to support our exporters, businesses, employers, farmers and fishermen who may be affected severely.”

Meanwhile, the European Union’s chief Brexit negotiator has told the United Kingdom that it could have a different kind of departure deal if London is willing to change its key demands.

Addressing the European Parliament on Wednesday, Michel Barnier defended the withdrawal agreement struck with British prime minister Theresa May which suffered a crushing defeat in a House of Commons’ vote on Tuesday evening and left the prime minister facing a confidence vote.

Mr Barnier warned that the risk of a disorderly withdrawal was now greater than ever as a result of the vote and that the EU would step up its preparations amid concern a no-deal outcome could disrupt the whole of Europe.

He indicated that one way forward would be for Britain to accept even closer alignment with EU regulations to secure a very close trading relationship in future. EU officials say London could, for example, abandon its determination to leave the EU customs union and the centrally regulated single market.

Referring to statements by the European Parliament and all the other member states, Mr Barnier said: “If the United Kingdom chooses to let its red lines change in future, and that it takes this choice for its advantage of the ambition of going beyond a simple but not negligible free trade accord, then the European Union would be ready immediately to ... respond favourably.”

That suggestion for a “deeper relationship” was echoed by the EU parliament’s Brexit coordinator, Guy Verhofstadt.

Mr Barnier and others lined up to highlight how the vote in London exposed only divisions, without shedding light on what Britain’s could actually rally behind as a consensual position, just 10 weeks before it is set to leave the bloc, potentially into a legal limbo for citizens and businesses.

“Please, please, please tell us finally what you want to achieve,” pleaded Manfred Weber, the centre-right leader in the parliament and an ally of German chancellor Angela Merkel.

But, he added, there was “no room for manoeuvre” in terms of renegotiating the current agreement, which Brexit campaigners say leaves Britain too tied to EU rules, especially due to a “backstop” insurance clause intended to avoid throwing up a hard customs border across Ireland.

The DUP Brexit spokesman Sammy Wilson on Wednesday doubled down on his party leader’s claimthat there had “never” been a hard border in Ireland, meaning the backstop was unnecessary.

Mr Barnier insisted there could be no weakening on that issue.

“Right now it’s too early to assess all the consequences of this vote,” he told a Strasbourg chamber that was sparsely attended for the early morning debate, perhaps reflecting a growing weariness in Europe with Britain’s troubles.

“We have respected and we continue to respect the democratic parliamentary debate in the UK and I will not speculate on the different scenarios. What yesterday’s vote showed is that the political conditions for the ratification of the withdrawal agreement are not yet there in London.”

Some EU politicians have called for Britain to put the question of remaining in the EU to a second referendum. The chair of EU summits, Donald Tusk, suggested on Tuesday that division in Britain could lead to Brexit being cancelled.

Frans Timmermans, the deputy head of the European Commission, citing a phrase often attributed to British fantasy novelist C.S. Lewis, suggested Britain should put its past tribulations behind it and seek a fresh start with the EU:

But Nigel Farage, the former leader of the UK Independence Party which drove the campaign for the 2016 vote to leave, told fellow members of the European Parliament that any second ballot would deliver an even greater majority for quitting because Britons had been angered by the EU’s stance in negotiations.