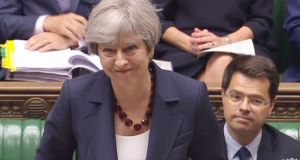 Theresa May speaking in the House of Commons on Wednesday: Three hours after her announcement, Ms May’s spokesman sought to play down the change of course. Photograph: AFP/Getty Images

Theresa May’s government signalled a major retreat from economic austerity on Wednesday, suggesting that a 1 per cent limit on public service pay increases will be reviewed later this year. Within a few hours, however, the British prime minister’s spokesman insisted that the government’s policy on public service pay had not changed.

A senior Conservative source said after Prime Minister’s Questions that ministers had “listened to the messages” sent by this month’s general election.

“We understand that people are weary after years of hard work to rebuild the economy. Public sector pay restraint is one of the tough choices we’ve had to make to balance the books after Labour’s crash and what was left behind. We are working through and looking at recommendations from pay bodies that are coming,” he said.

Three hours later, Ms May’s official spokesman sought to play down the change of course, repeating 15 times that the government’s policy was unchanged. He said that when various independent panels made recommendations about public pay later this year, the government would consider them.

Downing Street denied that the Treasury had intervened between the two briefings to put pressure on Ms May’s spokesman to play down the apparent change of policy. Liberal Democrat leader Tim Farron said the episode highlighted the chaotic state of the Conservative government.

“This is not strong and stable, it is a government that is spinning out of control. The Treasury can find £1 billion for the DUP so Theresa May can cling on to power, but can’t find the cash to properly pay our teachers, nurses and police,” he said.

Earlier, the prime minister and the Northern Ireland secretary James Brokenshire defended the Conservatives’ deal with the DUP, dismissing fears that it would undermine the Good Friday Agreement.

“This agreement underlines our steadfast commitment to the Belfast agreement and its successors. Indeed, I have been working with all major parties in the Executive in recent days to see the restoration of that Executive – one of the key bodies under the Good Friday agreement,” Mr Brokenshire said.

The DUP’s leader at Westminster, Nigel Dodds, highlighted the high suicide rate in Northern Ireland, which some mental health professionals have linked to the legacy of the Troubles. He said that some of the money the DUP has secured in return for its support for the Conservatives would go towards improving mental health services.

“Is it not time that people recognised that this is delivery for all the people of Northern Ireland, across all sections of the community, and that it is going to help some of the most vulnerable and disadvantaged people in Northern Ireland? People should get behind it and welcome it,” he said.