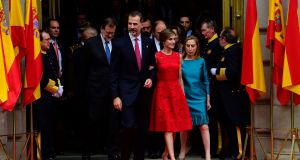 Spain’s King Felipe VI has issued a warning to Catalan nationalists that their plan to break away from the rest of the country threatens to generate “illegality, imposition and insecurity” and could end four decades of democratic coexistence.

Felipe (49) was speaking in Congress on Wednesday to mark the 40th anniversary of Spain’s first elections following the end of dictatorship, on June 15, 1977.

He told the chamber that no political project “can, or should, lead to the break-up of our coexistence, to the disregard of democratic rights of all Spaniards or the rejection of the essential values of the Europe to which we belong”. Although the king did not mention Catalonia by name, there was little doubt he was referring to the northeastern region, which has been at the centre of a political storm due to its nationalist government’s plans to hold an independence referendum on October 1st. The central government of Mariano Rajoy insists such a vote would be unconstitutional and that the referendum will not be allowed to take place.

In a speech that highlighted the achievements of Spain since the landmark elections of 1977, the monarch said that political differences should always be resolved within the framework of the law. “Beyond the law there is only illegality, imposition and insecurity,” he added.

Although the king’s speech was applauded, there were moments that reflected the tensions surrounding Spain’s territorial crisis. As the national anthem was played, members of Congress representing the nationalist Catalan Democratic Party (PDeCat) held up pictures of a vote being cast above two dates: June 15th, 1977 and October 1st, 2017.

The representatives of another pro-independence party, the Catalan Republican Left (ERC), and the Basque nationalist coalition Bildu did not attend the speech.

On Wednesday morning, the Catalan regional premier Carles Puigdemont had reiterated his determination to push ahead with the October vote, saying it was “an objective which cannot be given up”.

The leader of the main opposition Socialist Party, Pedro Sánchez, described the king’s address as “good, fitting, realistic and correct for the political, social and economic situation that the country is going through”.

But Pablo Iglesias, leader of the leftist Podemos party, said the speech “did not rise to the historic occasion”.

Away from the Catalan issue, the king also made history by acknowledging that the regime of Francisco Franco, which lasted from the end of the civil war in 1939 until his death in 1975, was a dictatorship, the first time the Spanish monarchy has ever done so.

The king said that “the civil war and the dictatorship were an immense tragedy on which there was no room to build the future of Spain.”

Felipe’s father, Juan Carlos I, was groomed by General Franco to continue his repressive rule. Instead, on taking the throne in 1975 Juan Carlos set about easing the transition to democracy, but he has never criticised General Franco in public. Juan Carlos abdicated in 2014.