A reprieve for Trump, occupier of an increasingly poisonous White House 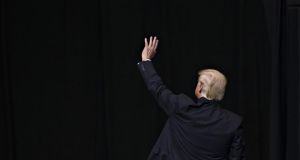 After the endless controversies, and incessant scandals, this week brought something of a reprieve for Donald Trump. The US president got a big boost on Tuesday when the Republican candidate, Karen Handel, won a congressional byelection in Georgia.

The 55-year-old comfortably beat her Democratic rival, Jon Ossoff, who had come tantalisingly close to winning the staunchly Republican seat in the first round of voting, in April. But despite investing tens of millions of dollars in the race, Democrats ultimately failed to clinch a win, raising serious questions for the party about how to tap into anti-Trump sentiment and win control of the House of Representatives in next year’s midterm elections.

Trump said how he was delighted to be away from the ‘Washington swamp’. ‘They have phoney witch hunts going against me,’ he exclaimed

Trump celebrated with a trip to Iowa, for an event the White House described as a Make America Great Again rally. The jubilant president was back in campaign mode as he addressed the crowd in Cedar Rapids, veering off script in a meandering hour-long speech. He said how he was delighted to be away from the “Washington swamp”. “They have phoney witch hunts going against me,” he exclaimed. A mention of Hillary Clinton prompted chants of “Lock her up!”

Back in Washington, DC, he could scarcely contain his glee, resuming his early-morning Twitter habits with gusto. In a series of tweets he mused on the Senate testimony of the former homeland-security chief Jeh Johnson. “By the way, if Russia was working so hard on the 2016 Election, it all took place during the Obama Admin. Why didn’t they stop them?” he wondered on Thursday morning.

He also took aim at Democrats, particularly the minority leader in the US House of Representatives, Nancy Pelosi, who is under fire from many in her party for the Georgia defeat. “I certainly hope the Democrats do not force Nancy P out. That would be very bad for the Republican Party – and please let Cryin’ Chuck stay!” he said, referring to the minority leader in the US Senate, Chuck Schumer.

By the way, if Russia was working so hard on the 2016 Election, it all took place during the Obama Admin. Why didn't they stop them?

I certainly hope the Democrats do not force Nancy P out. That would be very bad for the Republican Party - and please let Cryin' Chuck stay!

But although the president is basking in his newfound success, the honeymoon is unlikely to last. Next week will see Republican senators seek to win support for their plan to repeal and replace Obamacare amid sharp divisions within the party. And Robert Mueller, the special counsel, is continuing his investigation into Russian interference in the 2016 election.

Tensions within his administration are high as Trump increasingly takes to Twitter to vent and opine, bypassing his advisers and the media. A big shake-up of the White House communications team is believed to be in the offing.

On Tuesday Trump’s press secretary, Sean Spicer, appeared at the White House press-room podium for what many believe may be the final time. In recent weeks Spicer’s principal deputy, Sarah Huckabee Sanders – daughter of the Republican grandee Mike Huckabee – has stood in for him.

Spicer appeared to confirm that interviews are ongoing for his replacement, although the 45-year-old may be moving to become communications director, the more senior but less public role in which he has filling in since the departure of Michael Dubke, at the start of the month.

Spicer, a devout Catholic, had been looking forward to meeting Pope Francis. Instead Trump’s Jewish daughter and son-in-law were among those at the audience

Rumours that Trump has become increasingly dismissive of the man who went out to bat for him day after day in the White House press room appeared to have been borne out last month, during Trump’s trip to Europe and the Middle East. Spicer, a devout Catholic who defied Twitter trolls last year by appearing on CNN with ashes on his forehead on Ash Wednesday, had reportedly been looking forward to meeting Pope Francis. In the end Trump left him out of the Vatican group, with Trump’s Jewish daughter and son-in-law among those who had an audience with the pontiff.

Further speculation about Spicer’s position emerged this week. When a journalist asked why press briefings were happening off camera, the White House strategist Steve Bannon reportedly replied, in a text, “Sean got fatter.” Although some interpreted the astonishing reply as a joke – Bannon himself does not exactly cut a svelte figure – it prompted Chelsea Clinton to accuse Bannon of “fat-shaming” the press secretary.

Whatever Spicer’s future holds, the White House look sure to continue scaling back on press briefings, as relations between it and the media deteriorate.

There could be other opportunities for Spicer – who, unlike most of the Trump administration, had experience in his professional field before joining the White House, having worked as a spokesman for the Republican National Committee.

Brian Burns’s decision to withdraw from consideration to become the next US ambassador to Ireland means there is an opening in the Phoenix Park. Stranger things have happened. For Spicer it could be an opportunity to make a graceful exit from a White House that is becoming increasingly poisonous.