Italy considers closing its ports to ships from Libya 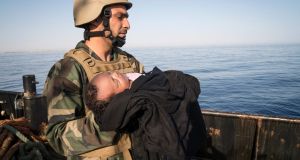 A Libyan coast guardsman during the rescue of 147 illegal immigrants attempting to reach Europe off the coastal town of Zawiyah, west of the capital Tripoli, on Tuesday. Photograph: Taha Jawashi/AFP/Getty Images

The Italian government is considering banning ships from Libya from landing at its ports after the arrival of nearly 11,000 refugees from there in the past five days.

It has been reported that the government has given its ambassador to the EU, Maurizio Massari, a mandate to raise the issue formally with the European commission to seek permission for a drastic revision of EU asylum procedures.

One idea being discussed is denying docking privileges to ships not carrying Italian flags that seek to land in Italian ports, mainly in Sicily or Calabria.

The surge in the number of refugees reaching Italy prompted the interior minister, Marco Minniti, to fly back en route to Washington to address the crisis. An intense debate has raged in Italy about whether NGOs waiting to rescue people off Libyan coastal waters act as an incentive for people-smugglers.

The centre-right fared well in local government elections at the weekend, placing pressure on the left coalition government ahead of elections due by next year.

Both Germany and France have said Italy, after the closure of the Turkey route, has been left alone to fend with the refugee crisis for too long. The German chancellor, Angela Merkel, is proposing a Compact for Africa at the G20 designed to boost private sector investment in the continent, and reduce the incentive for Africans to try to migrate to Europe to escape poverty.

Mattia Toaldo, a Libyan expert at the European Council on Foreign Relations said: “This is a panic measure and I would very much be surprised if it is legal. The law requires the rescue of people in distress on the high seas, and this self-blockade of Italian ports would leave migrants floating in the Mediterranean, including those in most NGO rescue ships.

“It is most likely designed to force Europe to take some kind of other action. It also shows that the ideas tried so far have failed. It was first proposed that the Libyan coastguard take more action to push the boats back. It was then suggested the tribes in southern Libya act as detention guards and then it was proposed to take action in Niger. Nothing has worked.”

The dramatic rise in numbers, prompted by good weather and a well-organised trafficking route also draws greater scrutiny to the plans prepared by Merkel for a long-term solution. Efforts to strengthen the Libyan coastguard by providing extra boats and training appears to have had little impact.

In the four days between 24 and 27 June, 8,863 migrants arrived, including more than 5,000 on Monday alone, according to the International Office for Migration. A further 2,000 people were reported arriving on Tuesday.

The June surge means comes after the arrival of 60,228 migrants in Italy by sea in the first five months of 2017, with 1,562 reported to have died on the central Mediterranean. The number of migrants from Libya this year is on course to exceed the 200,000 recorded last year.

There were 22,993 arrivals in May. Since the beginning of 2016, only in July and October last year were higher numbers of arrivals by sea recorded.

Nigerian is the first declared nationality of about 15 per cent of those arriving in 2017, followed by Bangladeshi (12 per cent), Guinean (10 per cent) and Ivorian (9 per cent).

Renato Brunetta of Forza Italia has pressed Minniti to block ships with migrants heading to Italy and ask the EU to allow them to be diverted to other Mediterranean ports.

Dr Merkel fears that long-term demographic trends mean 100 million Africans could be driven to Europe by climate change and poverty, and that European governments are unprepared.

Her guiding idea is to stem migration by combating poverty in Africa. Her specific initiative is to team up African nations committed to economic reforms with private investors who would then bring jobs and businesses.

Under the G20 compacts plan, an initial seven African nations would pledge reforms to attract more private sector investment. Leaders from these countries have been to Berlin to discuss the plan, meet investors and identify the practical reasons global finance shuns Africa.