The European Union's chief Brexit negotiator Michel Barnier says that talks over the continuation of the joint travel area between Ireland and the UK have advanced. Video: EU Commission 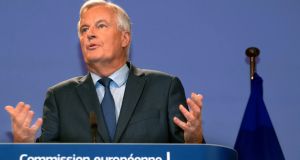 The EU/UK Brexit talks have hit an impasse over the UK’s Brexit bill, the EU’schief negotiator Michel Barnier told journalists in Brussels on Thursday.

He blamed the deadlock squarely on the UK’s failure to put in writing undertakings given by prime minister Theresa May in Florence last month that she would honour all the financial commitments undertaken by the UK as a member.

He said, to no one’s surprise, that he would not be in a position now to recommend to the EU summit next week that the talks had achieved “sufficient progress” to move to their next phase, which is discussions of the EU/UK future relationship.

Speaking at the end of the fifth round of Brexit “divorce” talks, Mr Barnier said the week had not seen any great steps forward, although some progress had been made on the post-Brexit rights of British citizens in the EU and EU27 citizens in the UK.

On Ireland, both negotiators echoed virtually the same words that they have used at the end of each of the preceding rounds. They talked generally of progress and said discussions are continuing on the principles surrounding the Common Travel Area, and on the detailed mapping of North-South co-operation arising from the Belfast Agreement.

They remained utterly committed to safeguarding the gains of the Belfast Agreement “in all its dimensions”.

Both men reiterated that they see any solution emerging to the challenges facing Ireland as “unique” and Mr Barnier emphasised it would not be setting any precedent. But he was convinced that they will get an agreement and will “move heaven and earth to do so”.

The UK’s Brexit secretary David Davis said we “are determined to tackle the unique circumstances of Northern Ireland by focusing creatively on specific solutions and we have begun to do so”.

Important differences still remain on citizens’ rights, notably on how they will be enforced, and specifically on the role of the European Court of Justice. In response to EU concerns at the bureaucracy many face, Mr Davis announced a “streamlined” new system for the three million EU citizens in Britain to claim residence rights.

He listed some of the issues on which agreement had yet to be reached:

* the right to bring in future family members;

* to export a range of benefits;

* to continue to enjoy the recognition of professional qualifications;

* to vote in local elections;

* to leave for a prolonged period and yet continue to enjoy a right to remain or permanent right of residence on return.

A British demand for its million or so citizens on the continent to have lifetime rights to move to any of the EU’s 27 countries after Brexit is held up by doubts among member states. Mr Barnier said those are rights to do with post-Brexit decisions and should be dealt with in the next phase of talks.