Find theatre stressful? Then you could be just what the BBC is looking for 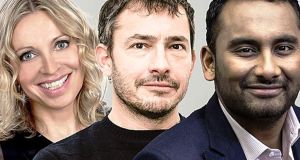 Do you find the theatre stressful? Do you resent having to wait for the interval? Does the 7.30pm curtain interfere with your children’s bathtime? Is it years since you’ve been? If so, perhaps you should consider presenting the BBC’s new arts show.

Front Row is moving from Radio 4 to BBC Two television on Saturday evening, with three new presenters: the restaurant critic Giles Coren, the broadcaster Nikki Bedi and the BBC’s media editor, Amol Rajan. Ahead of the first show the presenters told Radio Times about their own cultural preferences, and what they thought of the theatre.

Coren said that he hadn’t seen a play for six or seven years and that he always worried the actors would forget their lines. “I’ve always found the theatre stressful. I’ve not been because you’ve got to get there by half-past seven, and I have to bath my kids and put them to sleep before I can go out,” he said.

It’s the total lack of enthusiasm, or aspiration, or sense that they have been handed a role that might have any importance beyond their next pay cheque

Bathtime is also a problem for Rajan, who blames his baby for the fact that he doesn’t get to the theatre as often as he’d like. His favourite theatre in London is Shakespeare’s Globe, and he loves musical theatre. “I went to New York a couple of years ago and saw Andrew Lloyd Webber’s School of Rock, and a few weeks ago I saw Dreamgirls,” he said.

Bedi used to be an actor, but she prefers film to theatre and resents not having an interval for two hours and 45 minutes. “I want more intervals. I’m half-Indian, and even when we go to Bollywood movies in Bombay there’s an interval. It gives you respite from being intensely involved.”

Coren complains that the seats are not as comfortable as in the cinema and that, as a middle-aged man, he needs respite of a different kind. “I’d also like easier access to the loo. You should be able to access it from every single seat,” he said.

Actors, directors and playwrights were outraged by the interview, which the theatre and opera director Deborah Warner described as “the march of the Philistines”. Time Out’s theatre editor, Andrzej Lukowski, was forgiving of the three presenters’ lack of expertise but objected to the arrogance that appeared to suggest their ignorance was the theatre’s fault rather than their own.

“It’s the total lack of enthusiasm, or aspiration, or sense that they have been handed a role that might have any importance beyond their next pay cheque. Members of the professional presenter class famous for doing other things, they’re like jaded diplomats moving on to their next posting, grimly bracing themselves for the fact they might have to mingle with the natives in between G&Ts,” he wrote.

In choosing nonexperts to talk about the theatre, the BBC is following a trend set by UK national newspapers, many of which now employ political journalists or general feature writers as theatre critics. Most papers still use specialists to write about serious music and the visual arts, and it would be unthinkable for any media organisation to ask a nonexpert to write about sport.

The BBC’s retreat from serious arts journalism is perplexing, not least because its director general ran the culturally elite Royal Opera House

As serious theatre criticism disappears from the newspapers and the airwaves, new initiatives have emerged to fill the gap. These include Exeunt, an online magazine that publishes reviews, interviews and lengthy features about the theatre.

The BBC’s retreat from serious arts journalism is perplexing, not least because its director general, Tony Hall, came to the corporation after running the Royal Opera House, perhaps the most elite cultural institution in the United Kingdom. The opera house, like the National Theatre, is sufficiently powerful and well resourced to prosper without the attention of the BBC. But smaller institutions depend on the free publicity that reviews, interviews and features provide.

Coren is unruffled by the offence his comments caused, telling the radio version of Front Row that his remarks had been taken out of context. “I was attacked heavily by actors, by directors, by all sorts of people who read two jokes out of context and went nuts,” he said.