Analysis: Many Conservatives bewildered by decision to negotiate formal confidence and supply arrangement 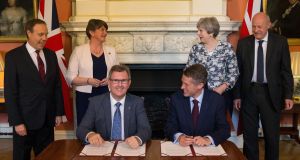 The Conservatives’ formal pact with such a socially conservative party will not help to extend its appeal among voters under 45, most of whom backed Labour on June 8th. Photograph: WPA Pool /Getty Images

Theresa May’s £1 billion deal with the Democratic Unionist Party (DUP) has bought her Conservative government the overall majority she failed to win at this month’s election. But it carries with it numerous risks which could make more likely the nightmare shared by both parties – Jeremy Corbyn as prime minister.

Many Conservatives were bewildered by the prime minister’s decision to negotiate a formal confidence and supply arrangement with the DUP, who were never likely to vote her party out of office. But May and the Conservative whips believed that only a formal deal, signed by both parties, would give her government the security it needs to push through Brexit legislation.

The agreement was signed by the parties’ chief whips, Gavin Williamson and Jeffrey Donaldson, in a short ceremony at Downing Street on Monday. Behind them stood Arlene Foster and Nigel Dodds on one side, and May and her deputy Damian Green on the other, like two sets of proud parents.

The scene prompted inevitable jokes about the happy couple celebrating their partnership, highlighting the best-known fact about the DUP outside Northern Ireland – their opposition to equal rights for gays and lesbians.

The Conservatives’ formal pact with such a socially conservative party will not help to extend its appeal among voters under 45, most of whom backed Labour on June 8th.

The promised £1 billion over two years in extra spending on infrastructure, health, education and other services will come in the form of grants. They will thus not affect the so-called Barnett formula, which allocates spending in Scotland, Wales, and Northern Ireland based on spending in England.

This has not stopped Scotland and Wales from crying foul and demanding matching spending increases. Welsh first minister Carwyn Jones dismissed the DUP deal as “a straight bung to keep a weak prime minister and a faltering government in office”.

It is not only in Wales and Scotland but throughout Britain that the extra spending for Northern Ireland will raise questions.

During the general election campaign, the prime minister taunted Corbyn by telling him there was no “magic money tree” to find his spending promises. Now that she has found such a tree for the DUP deal, her government will struggle to justify spending restraint elsewhere.

In a statement on the agreement, Minister for Foreign Affairs Simon Coveney said “an enhanced Northern Ireland voice articulating an agreed devolved government position could see more effective and inclusive representation of the unique circumstances of Northern Ireland at Westminster”.

What the DUP has agreed to do, however, is to support the British government’s Brexit legislation, with no guarantee that it will help to shape it.