Brexit: May says ‘freedoms’ of Irish citizens in UK to be preserved 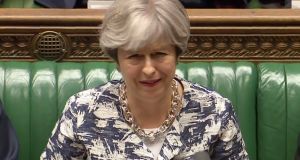 Theresa May made clear that immigration arrangements will not apply to Irish citizens, whose rights will continued to be guaranteed under the Common Travel Area. Photograph: Getty Images.

All EU nationals who have lived in Britain for more than five years would be allowed to remain permanently with most of their current rights retained under proposals announced by British prime minister Theresa May on Monday.

They would have to apply for a document similar to an ID card which would certify their “settled status”.

EU nationals with this status would continue to enjoy free access to health services and to the benefits system, with pensions and child benefits continuing to be paid outside the UK. But they would no longer have the right to bring in a spouse to live in Britain without meeting an £18,600 minimum income threshold – a restriction that applies to British citizens today.

Ms May made clear that the new arrangements will not apply to Irish citizens, whose rights will continue to be guaranteed under the Common Travel Area, or affect the Good Friday Agreement.

“We will preserve the freedoms that UK and Irish nationals currently enjoy in each others’ state. And Irish citizens will not need to apply for permanent residence to protect these entitlements,” she said.

The initial response from the EU was cool, with the European Commission’s chief Brexit negotiator Michel Barnier tweeting that “more ambition, clarity and guarantees needed than in today’s UK position”. Guy Verhofstadt, the European Parliament’s Brexit negotiator, said that a number of limitations in the British proposal remained worrisome.

EU nationals who arrive in Britain before a cut-off date which has yet to be determined would have two years to regularise their status under the new arrangements. But an estimated 150,000 people who have already applied for permanent residence in Britain since last year’s referendum will have to apply again, using a new, streamlined process.

Ms May ruled out any role for the European Court of Justice in adjudicating on the rights of EU nationals in Britain after Brexit, insisting that British courts could offer all necessary protection. The prime minister described her proposal as a generous offer to EU nationals in Britain but Labour leader Jeremy Corbyn said she should have guaranteed their rights before Brexit negotiations started.

“The truth is it is too little, too late. That could have been done and should have been done a year ago when Labour put that very proposal to the House of Commons. This isn’t a generous offer. This is confirmation the government is prepared to use people as bargaining chips,” he said.