London attacks have forced a serious end to a frivolous election

Counterterrorism is inescapably political, and the current leaders are proving wanting

Britain's terror threat level will remain at "severe" after militants killed seven people and injured 48 in London, Prime Minister Theresa May said on Monday (June 6), describing the assault as an attack on the free world. 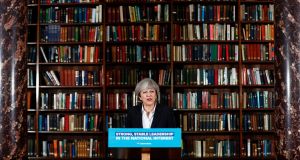 Britain’s prime minster and Conservative Party leader Theresa May gives a campaign speech in London on Sunday. If politics is to stay serious, more is required of May. Photograph: Odd Andersen/AFP/Getty Images

In London: The Biography, Peter Ackroyd’s take on perhaps the most-documented city since Rome, the first three index entries under London Bridge are “burned”, “destroyed by flood” and “destroyed by Norsemen”. Still, there it stands, not much to look at, shooing commuters into the City and the odd FT employee to work. When Londoners say they will not bow to terror, it is not a cheap boast. They can draw on a pedigree of defiance.

Politicians have to go beyond defiance. The public reaction to terror follows a pattern: pledges of unity, gallows humour and contempt for nativists who exploit the event. Yes, Donald Trump’s tweets after the London attack demeaned the US presidency. But he is not the problem, and nor is a misjudged headline in the New York Times that imagined Britain “reeling”.

Anger at these ignorant insensitivities is warranted until it spills into avoidance of the issue. Even if the US had the classiest leader in the world, it would remain true that a small but meaningful number of British citizens are potential killers in a cause and that Europe is menaced by ungoverned spaces to its southeast.

If voters would rather not dwell on such dark realities, there is no shame in that. It is the unique burden of leadership to resist this temptation and go to the heart of the matter. Theresa May has done it in recent days by suggesting new measures against terror. In the process, the prime minister was seen by some to politicise the subject.

I am no longer sure this is a bad thing. Counter-terror is inescapably political. It is not like the setting of interest rates. It makes a claim on public resources and engages multiple branches of state. It involves principles and trade-offs, such as the immemorial one between freedom and order.

The Labour opposition is entitled to ask whether tight budgets for the police are conscionable at this time, even if calls for the premier’s resignation are frivolous three days from a general election. And May is entitled to explore a harder line on non-violent extremism, even if her predecessor, David Cameron, might wonder where this will was when she was home secretary.

Better to air these questions than to go on with an eerie status quo in which counter-terror is simultaneously the most important work undertaken by the state and among the least understood. In the closed world of security think tanks, consultants and journalists, there has been a rich discussion about the government’s anti-extremism strategy since it was led by Tony Blair. Could even the best-informed voters say in outline terms what that strategy is?

In France, two intellectuals vie to explain the source of terrorism, with Gilles Kepel putting it down to extreme religion and Olivier Roy to nihilist psychology. It can be intemperate but Britain deserves a debate of equivalent openness and sophistication. Instead, we have an unevolved one in which ministers pledge to confront “this ideology”, as if we know what that means, and any cheap-shot merchant can tell them to cool ties with Saudi Arabia, as if that were an uncomplicated business with no security implications of its own. As long as operational matters remain secret, the public can bear more depth, candour and disagreement on the question of their own protection.

The attacks on Manchester and London have forced a serious end to a frivolous general election. If politics is to stay serious, more is required of May. It was not Labour that chose to call a sudden vote, test our patience with a seven-week campaign and then say next to nothing of consequence.

To assess a politician, look for early behaviours that do not cost them at the time but expose flaws that will resurface to more devastating effect in the future. In 2011, Cameron vetoed the European fiscal pact, which went ahead regardless. Voters cheered his gesture but it showed an incomprehension of European politics and a quickness to cave to Conservative purists. Both traits would combine to bring him down.

In the past few months, May has implied that British co-operation with the EU on security is conditional on good exit terms, and accused continental leaders in all but name of subverting the election. Next to this, her U-turn over social care was just a run-of-the-mill accident. It is an unseriousness abroad, a failure to leave behind the home office itch to land favourable tabloid headlines, even when it comes to the highest matters of state, that augurs badly for her premiership.

The overall impression from the past seven weeks is of a nation protected by the best of its citizens, and governed by merely the best available.