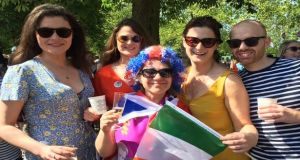 “This is the first royal wedding I’d ever have felt okay waving a Tricolour at,” says Linda Foster from Cavan, from her spot halfway along the Long Walk outside Windsor Castle.

She’s in London especially for the occasion, having flown over with her sister Orla and their cousin Louise Fitzpatrick. They’ve spread themselves out with picnic blankets and are joined by a group of friends in Union Jack wigs and flags.

“We’re doing our bit for cross-border relations,” they explain, an effort that apparently involved opening their first bottle of prosecco at 9.20am.

They wouldn’t normally be royal watchers, but there’s something about Meghan, something about this particular wedding, they agree. She’s just a few years older than them and “she’s more down to earth than other royals. And because she’s American, it feels like an international celebration. So it’s the least we could do to have the Tricolour represented.”

Aaron, who works in communications in Silicon Valley – and is here with his friend Alex Conlan, also in a bridal gown – wouldn’t normally be a royal watcher, with the exception of one particular royal. They flew over from San Francisco especially for the wedding, “in a last ditch attempt to persuade Harry to change his mind”.

“I’ve had a crush on him for 20 years,” says Ender, blinking his extravagant lashes. “The Duchess of Sussex,” he sighs when word filters down to the crowd on the Long Walk of Meghan’s new title. “That could have been me.”

It’s all a giddy relief from the previous night, when everyone I met had been busily not getting caught up in the excitement, including the eight or nine taxi drivers at Heathrow who refused the fare into Windsor.

“Sorry, love, nothing’s moving in there. Streets will be closed by 10.” A driver called Michael – his dad is from Kerry – eventually agrees to take me to Windsor. He thinks it’s all sweet, but it’s “chick stuff” really. He just hopes the marriage lasts, he says, with a shrug that suggests he’s not placing any bets. “It’s not about nationality or colour or background, really. It’s just they have different values, different expectations,” he says.

I’m beginning to give up hope of tapping into colour and excitement on the streets of Windsor. But then I meet Dawn Wilson. Dawn jumps into my taxi as it leaves for Windsor, as she’s headed in the same direction. She was at home in Hillsborough outside Belfast on Thursday afternoon, and she just decided she couldn’t miss it.

So here she is, armed with her pop-up tent, a small bag and very little else. She was here for Kate and William’s wedding too, and remembers when Charles sent out a tea tray, and Camilla came out to say hello to the crowds. They all brought tents and stayed up all night, having barbecues and drinking wine and chatting. It’s not just about the royals, she says: it’s about the party too.

All the same, she almost wasn’t going to come this time. “I was going to watch it at home.” But then she calculated this would be the last royal wedding for 20 years, and she pulled out her phone and started booking flights.

I drop her off after 10pm near Windsor Castle, where she’s going to find somewhere to pitch her tent. She later texts me to say they weren’t allowing anyone to sleep in tents on the Long Walk, but someone had lent her a chair and some woolly socks, so she is grand.

Picnics in the sun

When I get there the next morning, Dawn is nowhere to be seen, but the party on the Long Walk is in full swing. There are picnic blankets and sun shades spread out on the lawn, and hip young couples with poodles on leashes or jugs of prosecco. The orderly line of people queuing with their Union Jacks at the red Pimm’s bus may be the most English sight in history.

There are groups of men who look like city types in their weekend clothes, swinging designer bottled water; young families with small children, clattering along with bare legs and madly waving flags. There are TV reporters describing, over and over in the absence of any other real news, how the sun is now really beating down on their backs.

I hear one enthusing on air about the tractor that came to wash the streets near Meghan’s hotel of dust. In fairness, there is a lot of air time to fill before the first guests began arriving at 11.20am.

You can spot the Americans, because they’re the extremely well-dressed ones, festooned in fascinators, heels and red, white and blue. They’re taking their wedding attendance a lot more seriously than the British with their flip-flops and shorts or summer dresses; their tasteful picnic baskets and small flags; and general air of restrained decorum. It’s almost as though they’re unused to basking in the glow of positive international attention and don’t quite know what to do with themselves.

One young English couple, Katy and Marc Pieris, have brought their baby son Aeon along, but only because they were in the area anyway, they stress. “I think it’s a thing for him to know he was here,” Katy says cautiously.

They’re not royalists, they say, but they’re not anti-royalist either. They like Meghan and Harry for their good work, and the fact that it feels a bit international, and “we thought it would be a fun day out”.

And it is – it’s like a cross between Wimbledon and Glastonbury. A cheer goes up every time a group of policeman in their well-fitting black uniforms passes up or down the concourse.

“The English policeman are so hot,” sighs Carolyn Miller, who made the trip especially with a crowd from North Carolina. An African-American, she’s happy “there’s a bit of colour in the castle now”. She’ll be happier still if she goes home with a policeman.

Dubliner Edel Greenwood is relaxing with her Union Jack in a chair on the lawn. She’s been in England for 50 years, but she hasn’t lost her accent. Her family back in Ireland, including cousin Harry Crosbie, would kill her. She likes the fact that Meghan has an Irish father, but she’s very disappointed he isn’t here. He should have come, even if he was on his last legs, she says. “Wouldn’t you do that and more for your child,” she says.

But if he really couldn’t, she wishes Meghan’s mammy and not Charles was walking her down the aisle. Anyway, “she’s a strong girl, and she’ll do lots for the royal family”.

Nearby, a young African American called Wealth is leaning tiredly against the railing, wrapped in giant pink duvet. She’s been here since 6am and despite the temperature, looks freezing and a bit miserable. “I love the queen,” she says simply.

The first big cheer of the day comes at the sight of Amal Clooney on the big screens who, everyone agrees, gets it absolutely right in daffodil yellow. Victoria Beckham looks a bit too sombre in black, a group of exchange students from Sydney, California and North Carolina decide, as they wait by the crepe truck. They love Meghan Markle because they see her as a bit like them. “She’s had to work hard for everything she has, and she’s feminist,” they say.

The crowd roars even louder when the queen arrives, right on cue, at 11.55am. We watch Meghan Markle’s mother, Doria Ragland, looking a bit sad and ill-at-ease in the church, her lime-green dress a paler reflection of the queen’s. There’s only one queen in this family, the message seems to be.

Maybe she just couldn’t face the pressure of walking her down the aisle, someone decides. It’s a nice thing Charles is doing, someone else says. There’s a huge collective “aaaah” at the sight of Harry’s shy smile, as he catches his first glimpse of the bride-to-be.

The reaction to the dress ranges from “demure” and “simple, elegant” to “well, it’s a little bit boring”. A group of women drinking Pimms in their early 20s under a tree afterwards feel it was a good choice, if a little safe.

“The long train was a tribute to Diana,” says one. “Yeah, but it was too plain on the bodice,” says another. “It was even a bit ’70s.” Will the style catch on? “Oh definitely.”

There’s a slightly stunned silence when the ebullient American preacher Michael Curry takes to the pulpit. “He has the floor and he’s making the most of it,” says someone tersely. “Kate looks like she wants to kill him,” someone nearby mutters. No, no, someone else insists, she’s trying not to giggle.

Everyone sings along happily to the gospel choir performing Stand By Me, and then the ceremony ends, and the Duke and Duchess of Sussex, who’ll always be Harry and Meghan to the crowd on the Long Walk, take off on their speedy carriage tour of Windsor.

There’s a surge forward and a roar as they turn up our way, and suddenly there they are in the flesh, a cloud of white, a sparkle as the light catches her diamond tiara and a brief flash of ginger, and just as suddenly, they’re gone.

Beside me, I see a mother and daughter from Dorset I met earlier lean into each other, with tears in their eyes. That was history, they agree.