British royals crisis meeting: everything you need to know

Q&A: Who will be at the meeting and what are the issues raised 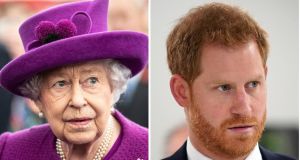 Who will be there?

The Queen, Prince of Wales, Duke of Cambridge and Duke of Sussex, with the Duchess of Sussex likely to be dialling in. It is being billed as a “family” meeting. Senior royal aides will attend only if requested. The royals will have read documents in advance outlining the implications of different proposals. The scenarios have been drawn up by officials following consultations, including with representatives of the UK and Canadian governments.

What are the issues?

Pinning down exactly how Harry and Meghan see their future “new progressive” roles. Discussions will include how the couple will divide their time between the UK and North America, and whether they can they retain their HRH titles.

The central issue will be how they are to be funded, and who will foot their security costs.

They will remain the Duke and Duchess of Sussex, but retaining their HRH status has risks. They say they will carry out royal duties “as called upon”. As such, they will be representing the Queen and the UK. But they also want to be “financially independent” and able to earn an income. One pitfall is a risk of conflict between their royal and charitable roles and any commercial interests. Potentially, it leaves them open to accusations of cashing in on their royal status, or of tarnishing the royal brand.

What does the Queen want?

First and foremost, she wants real progress to be made on Monday. Officials have been asked to work “at pace”. She wants a plan within days. She and other senior royals will want to keep the couple within the institution as far as is possible, but she will want them to feel that they have been given real and proper opportunity to explore a new way of working, and not feel pressured into something they do not want.

What exactly do Harry and Meghan want?

Their new website is scant on detail. They have expressed their intent to “step back”, but to continue with charitable work, and to support the Queen when asked. Primarily, they want the ability to earn an income unfettered by royal constraints. They want to give up the sovereign grant money, which is about 5 per cent of their present expenditure excluding security and official overseas travel. The rest is met by Charles, through his Duchy of Cornwall income. One issue will be how much Charles is prepared to pay as the couple transition to becoming “financially independent”.

Is there a middle way?

A Commonwealth role could be a compromise, releasing them from the day-to-day grind of the royal diary, yet allowing them to live overseas and perform on a global stage. Harry is already president of the Queen’s Commonwealth Trust and Meghan is vice-president.

Canada, which appears to be their chosen destination, is a realm, with the Queen as head of state. There may be a way of engineering a hybrid royal role. The head of the civil service, Sir Mark Sedwill, is understood to have been exploring the potential of a Commonwealth role. – Guardian