Appeal court to rule on legitimacy of Netherlands’ coronavirus curfew 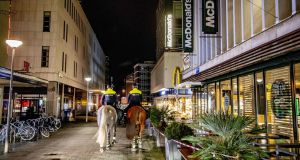 Dutch police officers patrol on horse in the centre of Rotterdam to enforce the 9.0pm nightly curfew implemented to fight against the spread of the Covid-19 in the country. Photograph: Robin Utrecht/AFP/AFP

The crisis in the Netherlands over the legitimacy of the coronavirus curfew imposed by the caretaker government last month is expected to be resolved on Friday – when an appeals court rules on whether the overnight restrictions should remain or be abandoned.

With just a month now to a general election, the government’s pandemic strategy was thrown into chaos on Tuesday when a court in The Hague ruled that the curfew had unacceptably curtailed freedom of movement and should end with immediate effect.

The government launched an appeal, and an emergency hearing of the court on Tuesday evening – less than an hour before the curfew was due to start at 9pm – decided that given the national importance of the issue the ban should remain until the substantive question is decided on Friday.

Presiding judge Marie-Anne Tan-de Sonaville said the interests of the state in fighting the pandemic had to “carry more weight” than those of Viruswaarheid (Virus Truth), the anti-lockdown campaign group behind the lawsuit.

Giving evidence, the government’s infectious diseases adviser, Jaap van Dissel, said retaining the curfew was “crucial” in a country where roughly one million people had been infected and some 15,000 had died, and where the position with new variants was “fragile”.

“The overnight curfew, combined with allowing just one person to visit a house in 24 hours, is having a real impact on the infection rate”, he said. “We are talking about exponential growth here, so it is preventing us having to deal with hundreds of new cases every day.”

In advance of that interim decision, acting prime minister Mark Rutte had appealed to the public to continue to support the curfew given the increased risk of infection from new virus strains, although police said they would be “reluctant” to hand out curfew fines until the validity of the law was clear.

To protect against a situation where it loses Friday’s appeal and the legal basis of the curfew is found again to have been faulty, the caretaker government sent new draft legislation to both houses of parliament on Wednesday evening with the aim of anchoring it in law.

Parliament is already in recess in advance of the March 17th election, and will have to be recalled on Thursday morning if the draft legislation is to pass both the lower house and the Senate by Friday evening.

What remains unclear, however, is how MPs and senators will respond to the drama of the past 48 hours – and whether some of those who had reservations about the curfew in January may be emboldened to actually vote against it this time.