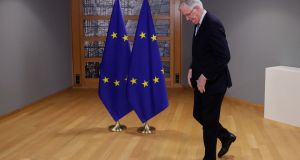 Michel Barnier arrives for a meeting at the European Council in Brussels, Belgium, on February 9th. Photograph: Stephanie LeCocq/AFP via Getty Images

The EU’s former chief Brexit negotiator, Michel Barnier, said on Tuesday he was setting up a political faction under the name “Patriot and European”, fuelling rumours that he was mulling a possible bid in next year’s French presidential election.

“I am available to work with all those who want it under the banner of ‘Patriot and European’, so as not to leave this theme to others,” Mr Barnier told French centre-right politicians in a closed-door meeting, according to a participant.

The faction was presented as a “working group” within the centre-right Les Républicains party, the participant said.

Mr Barnier’s office did not return a request for comment.

More than a year before the first round of the 2022 presidential election, none of the former mainstream centre-left and centre-right parties, who were shut out by centrist Emmanuel Macron’s victory in the last election in 2017, have chosen a candidate.

Each camp is abuzz with rumours, and sources on the right cite Mr Barnier, but also ex-ministers Xavier Bertrand and Valérie Pécresse, as well as senator Bruno Retailleau, as possible candidates for the main centre-right party, Les Républicains.

A possible bid by Mr Barnier, a 70-year-old former French foreign minister, is being closely watched by Mr Macron’s camp, as he would eat at the pro-European, centre-right electorate the president is targeting.

“There’s a Biden moment. Grey hair could become fashionable,” a minister told Reuters on condition of anonymity, when asked about Mr Barnier.

Mr Barnier said on French radio in December he saw himself serving his home country in some capacity following his work on negotiating Britain’s exit from the EU, without elaborating.

A diplomat in Brussels told Reuters Mr Barnier was “actively evaluating his chances” for the presidential election, with current polls showing Mr Macron and far-right leader Marine Le Pen as likely to reach the second round in the election.

Sources in Mr Macron’s government say Paris mayor Anne Hidalgo is also mulling a presidential bid. The 61-year-old Socialist is no longer ruling out running for president in interviews.

“Hidalgo is going to go for it. Her team is ready for battle,” one official told Reuters. – Reuters