Some UK election polls show huge Corbyn surge. What is going on?

As new poll shows Theresa May only 3% ahead, how pollsters deal with turnout rates is key

The leader of UK's opposition Labour party Jeremy Corbyn said on Thursday (June 1) there was a "movement" gathering among voters who wanted "something different" from the current Conservative administration, ahead of a national election on June 8. 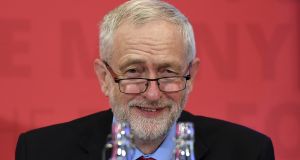 Labour leader Jeremy Corbyn: has large support among young voters, but how many of them will make it to the polling stations? Photograph: Chris J Ratcliffe/Getty Images

After their failure to predict David Cameron’s overall majority in 2015 and last year’s referendum vote for Brexit, Britain’s polling companies are under pressure to do better at next week’s general election. But whatever happens on June 8th, it looks as if some of the country’s leading pollsters are going to get the result very badly wrong.

When the polls are wrong, they are usually nearly all wrong in the same way, as in last year’s US presidential election, when all but a handful predicted a victory for Hillary Clinton. In that case, the pollsters could claim they had not entirely failed, because Clinton won the popular vote but lost to Donald Trump in the electoral college.

Britain’s pollsters are more dramatically divided about the outcome of this election than ever before, with the latest poll from Panelbase putting the Conservatives 15 points ahead of Labour, while YouGov on Thursday put the Tory lead at just three points. YouGov, along with Survation, has consistently shown Labour faring better than in other polls.

This week, YouGov shocked Westminster with a projection based on 50,000 interviews with voters, predicting that the election could end in a hung parliament. The projection, which uses data about each constituency to predict how voting intention would translate into seats, suggested that the Conservatives could lose 20 seats while Labour could gain almost 30.

YouGov has built a profile of each constituency, based on voting history in elections and in the EU referendum as well as the ethnic and educational breakdown of the electorate. The pollster looks at how such voters are acting on a national level and apply that information to the constituency to predict the outcome.

This is a more sophisticated method than the standard application of a uniform national swing to predict how each seat will go in the election. But its accuracy depends on the data collected nationally and, crucially, on the model the pollster uses to predict how likely different groups of voters are to vote next Thursday.

Under Jeremy Corbyn’s leadership, Labour has built up a huge lead among younger voters, particularly those aged between 18 and 24, two out of three of whom say they will vote for the party. But will they? Turnout among young voters has traditionally been poor, a trend summed up nicely by one Conservative candidate to the Huffington Post this week.

“Under-30s love Corbyn but they don’t care enough to get off their lazy arses to vote for him,” the candidate said.

YouGov and Survation base their predictions on an estimate that 80 per cent of younger voters will vote next Thursday, an unusually high turnout. Pollsters such as ICM and ComRes, which have the Conservatives’ lead in double digits, share the Conservative candidate’s view of young voters’ motivation.

Where all the pollsters agree is that Theresa May’s lead has shrunk dramatically since the start of the campaign, when she appeared to be on an unstoppable course towards a landslide victory and a majority of more than 100. They also agree on the primary cause of the tightening – an unexpected consolidation of the Labour vote behind a popular manifesto.

Labour owes some of its rise in the polls to Corbyn’s improved rating as voters discover the Labour leader’s agreeable, easy manner on the campaign trail. Labour has also benefited from a squeeze on the smaller parties, notably the Liberal Democrats, whose focus on reversing Brexit has not caught fire with voters.

There is evidence too, however, that Labour waverers have drawn back from crossing over to the Conservatives, partly because they have lost faith in May as the “strong and stable” leader she claimed to be.

All national polls still put the Conservatives ahead of Labour and none in the past month has the Conservatives below 42 per cent – five points more than Cameron’s share in 2015, when he won an overall majority. On the other hand, something unusual is happening in this election and most new polls bring better news for Corbyn than for May.