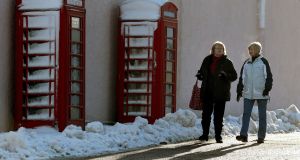 Travel was disrupted, households suffered power cuts and schools were shut as heavy snow swept across the UK on Thursday, the union’s coldest day for seven years.

Motorists were stranded in vehicles and trains and planes were delayed or cancelled due to the weather. Emergency services up and down the UK said they were being inundated and called on people to only travel if they really needed to.

The coldest spot was Braemar in northeast Scotland, where residents shivered in a temperature of -14.4 degrees Celsius, the Met Office said – the lowest in the UK since 2012, when it reached -15.6 degrees at Holbeach, Lincolnshire.

An amber severe weather warning – meaning there is a potential risk to life and property – was in place for parts of southern England and Wales on Thursday, with the Met Office predicting that up to 10cm of snow could fall and cut off communities, especially on high ground.

A flood alert was issued for the south Devon coast from Start Point to Dawlish Warren, and Torquay seafront was shut because of high tides and stormy conditions.

Cornwall airport, near Newquay, was temporarily closed due to snow on Thursday afternoon.

The snow led to the cancellation of some sporting events, including race meetings at Fakenham in Norfolk and Wincanton in Somerset.

Devon and Cornwall police said the snow was causing disruption on the A30 near Jamaica Inn at Bolventor. As darkness fell about 100 vehicles were trapped on the same road at Temple on Bodmin Moor.

Highways England advised people to avoid roads including the M5 in the southwest and the A303. It had 25 snow blowers ready to clear snow from motorways and major A roads.

Dartmoor national park closed some roads because of ice and advised drivers to avoid the area.

The AA advised motorists to carry a winter survival kit containing items such as an ice scraper and a blanket.

In Caerphilly, south Wales, a gritter truck overturned on ice, despite the road being gritted three times in one day.

The Met said the sleet and snow would ease in the south on Friday but there could be more wintry showers, especially in the north and east. The Met Office forecaster Mark Wilson said the cold temperatures were due to stick around. “Saturday night into Sunday could also be very cold.” – Guardian