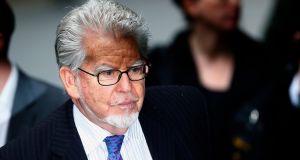 Veteran entertainer Rolf Harris has admitted he is a “touchy-feely” person but denied indecently assaulting a friend of his daughter while on holiday.

The 84-year-old told Southwark Crown Court that he did hug the girl on the trip, but said he would hug most people.

Giving evidence for the first time during his indecent assault trial, the star - wearing a pin-striped suit and turquoise and purple tie — told jurors: “I’m a very touchy-feely sort of person.”

Harris replied: “Yes, I have. I’m a very touchy-feely sort of person.”

Ms Woodley asked: “In any sexual way or not?”

The artist was then questioned about a particular incident which is alleged to have happened when the girl, who was friends with his daughter Bindi, travelled with them to Hawaii.

Ms Woodley said: “She says that when she came out of the shower you were there and you indecently assaulted her. Did you do that?”

The TV star replied: “No, it didn’t happen.”

Harris, from Bray in Berkshire, faces 12 counts of indecent assault on four alleged victims between 1968 and 1986, all of which he denies.

Seven of the counts relate to his daughter’s friend, who claims he carried out a string of assaults on her over a number of years, starting with the foreign trip.