Britain has lifted its national security threat level to critical from severe, meaning an attack is expected, after a bomb on a London commuter train injured 29 people on Friday. Video: Reuters 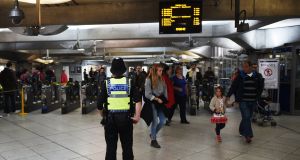 Police patrol the the London Underground on Saturday after the terror level was increased to “critical” after a terrorist attack in Parsons Green station, London, on Friday. Photograph: Facundo Arrizabalaga/EPA

A teenager is in custody and an evacuation has been mounted by counter-terror officers investigating the Parsons Green bombing.

Police are searching a house in Sunbury-on-Thames, Surrey, after an 18-year-old - understood to be the suspected bomber - was arrested in Dover earlier on Saturday.

The property is registered to foster carers Penelope (71), and Ronald Jones (88), who were awarded MBEs in the 2009 New Year’s Honours List for services to children and families.

Several residents said the couple lived there and Nicola Ryder, who lives opposite, described the couple as “beautiful people”.

She said she knew them just as Penny and Ron, and that they would foster up to seven young people at a time between the ages of 10 and 18.

The couple featured in an interview with Elmbridge CAN, a community group which aims “to build a culture of welcome to refugees” and help settle them in the local community.

The organisation states that Mr and Mrs Jones have been foster parents for almost 40 years and had taken in 268 children - the last eight of which were refugees. It is not clear when the interview was published.

In the interview Mrs Jones said fostering “had its ups and downs”, adding: “They’re all children, it doesn’t matter if they’re sky blue or with pink dots on them - they just need to be loved.”

Earlier, British home secretary Amber Rudd said it was “much too early to say” whether the bomber was part of the current security picture, following comments from US president Donald Trump that the culprit was known to Scotland Yard.

Speaking after a meeting of the government’s emergency Cobra committee, Ms Rudd said the arrest was “very significant”, and added: “We have one arrest and an ongoing operation - when we have more information, we will be sharing it.”

It came as people in Sunbury were forced to flee their homes following the arrest. Residents have claimed that live explosives have been found

Mojgan Jamali, who was among those evacuated from Cavendish Road around 1.40pm, said she was told by police she had “one minute” to pack her bags, grab her children, and leave home as officers carried out urgent operations in the area.

The mother-of-three told the Press Association: “I was in my house with my children and there was a knock at the door from the police.

‘You have one minute’

“They told me to leave. They said: ‘You have one minute to get out of the house and get away’.

“I just got out, I got my three children and we left the house and the street.”

Police officers told residents they must wait “at least a few hours” before they could return to their homes, and directed them to the nearby Staines Rugby Club.

Investigators - who it is understood are linking the attack to Islamist extremism - are continuing their inquiry and the threat level remains at critical, which means a further attack is feared to be imminent.

The country’s top counter-terrorism officer, Assistant Commissioner Mark Rowley, indicated a potential network of plotters could have been involved, stating police were “chasing down suspects”.

His capture took place in the port area of Dover at around 7.50am. It is the busiest ferry hub in Europe and serves as a commercial gateway to the French coast, including Calais and Dunkirk.

A key strand of the investigation has focused on CCTV, as officers comb through footage to establish who planted the device, and when and where it was placed on the train.

The vast manhunt was launched after an improvised device partially exploded on a District Line train at Parsons Green station during the Friday morning rush hour, injuring 30.

Troops have been dispatched to free up armed police officers after the country’s terror threat level was raised to its highest point.

Friday’s device reportedly contained the explosive triacetone triperoxide and nails, but is thought to have only partially detonated from inside a bucket.

Parsons Green station was reopened in the early hours of Saturday.

There were fears the number of those hurt could have been much higher - with real potential for life-threatening injuries - had the bomb, which was concealed within a supermarket carrier bag, fully exploded.

It is not yet known whether the device, which was reportedly fixed with a timer, went off at its intended target.

The train - bound for Edgware Road - was just pulling into the station in southwest London when the device detonated in the rear carriage, sending passengers fleeing to safety.