Plan B: Brexiteers look for a back door around the backstop 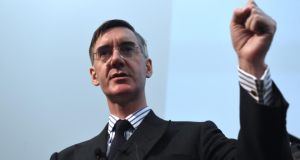 Jacob Rees-Mogg speaks in a meeting of The Bruges Group, a pro-Brexit think tank in London, Britain on January 23rd EPA/Facundo Arrizabalaga

Evangelists for a no-deal Brexit haven’t given up.

On the contrary, they have been emboldened by this week’s vote in parliament, by polls showing support for a no-deal exit, and by a new plan that they claim will give the UK a quickie divorce from the European Union with none of the pain experts predict.

If it all sounds too good to be true, it is.

Jacob Rees-Mogg and other Brexiteers have flogged the proposal incessantly as the best solution to the current political impasse. The Daily Express has dubbed it a “secret weapon”.

It is the key to a newly hatched Plan B, supported by both hardliners like Rees-Mogg and some moderates in prime minister Theresa May’s Conservative party.

If the prime minister fails to return from her negotiations in Brussels with what Boris Johnson has called a “freedom clause” to get out of the Irish backstop, expect Brexiteers to push what they call an Article 24 arrangement.

Most of us aren’t well-versed in the General Agreement on Tariffs and Trade, the 1948 agreement to reduce trade barriers that is now part of the World Trade Organization.

But Article 24 is well-known to experts as the rule that allows groups of countries to discriminate in favour of each other without having to treat all trading partners equally, as the World Trade Organisation’s (WTO) most-favoured nation rules require.

Brexiteers argue that the UK and the EU can use Article 24 – and especially paragraph five’s provision for an “interim” arrangement that can last up to 10 years while a permanent deal is being negotiated – to agree a zero-tariff deal with the EU until a long-term free-trade agreement is developed.

Presto: Brexit happens on March 29th with no food and medicine shortages, no Irish backstop, no border controls and no panic. If only.

I have written a basic UK-EU FTA (in my personal capacity) to show what minimum one needs to satisfy Art XXIV GATT. It does not of itself guarantee frictionless trade. And not all PEM rules of origin will be suitable. But it works as an emergency measure. https://t.co/jjvssUkitx

The problem here isn’t in drafting a deal quickly. It can be done over lunch, if you know what you are doing. Lorand Bartels of the University of Cambridge’s law faculty, does and did, recently devise a full, ready-made Article 24-compliant agreement, which he tweeted. It contains three brief articles as well as an annex and fits neatly onto three-quarters of a page.

Brexiteers seized on the paper as proof an Article 24 Brexit is possible – but they missed the simple point of Bartels’s exercise.

Striking a bare-bones trade agreement isn’t hard; but it would never come close to replicating the frictionless system that allows the crankshaft used in a Mini to cross the Channel three times before the finished car rolls off the assembly line.

It wouldn’t cover service industries, which account for 80 per cent of the UK economy and 45 per cent of total UK exports. A bare-bones Article 24 deal would say nothing about regulations, standards or access to each other’s customs databases.

Repeat something often enough and it acquires a veneer of respectability. Pretty soon, it just becomes accepted

Nor, crucially, would it remove border friction. Brexiteers suggest Article 24 can be used to get rid of the hated backstop that would keep the Irish border open under May’s deal.

But Article 24’s reference to measures to “facilitate frontier traffic” in adjacent countries was intended for grazing cattle – provided they return home after crossing the border. It doesn’t begin to address the unique circumstances in Northern Ireland.

Of course, the UK can’t sign an Article 24 deal unilaterally; it would require agreement from the EU. And why would the bloc consent to anything that imperils the €44.5 billion divorce settlement that the UK has already signed up to, or put its cherished Irish backstop in jeopardy?

Should Brexiteers insist on going the “interim” deal route – perhaps an easier sell politically – it still wouldn’t be a cinch. Such an agreement must include a timetable and a schedule of items that will be covered in the final agreement.

Article 24 is vague about how long this has to be, but Peter Ungphakorn, who worked in the WTO secretariat for nearly two decades, reckons it’s a lot longer than a page.

“It has to say what is being implemented in the interim, and give some indication of what the final deal will cover, and how the talks will get there,” he says.

And then other WTO members could demand the interim agreement be changed, especially if they felt their own interests were hurt.

They could even object if they think it sets a bad precedent. That could lead to disputes – just as the WTO’s dispute settlement mechanism is jammed because the Trump administration has blocked the appointment of new judges for it.

Repeat something often enough and it acquires a veneer of respectability. Pretty soon, it just becomes accepted.

That has been the case with a no-deal Brexit: It was unthinkable even for Leavers during the 2016 campaign; then it was on the fringes of the debate; now it is at its very heart, and accepted by four in 10 voters.

So clarity on the facts; something that never happened during the 2016 campaign, when a distinctly dubious claim about how Brexit would free up £350 million a week for the National Health Service was plastered across a red bus and believed by many is important.

Getting a zero-tariff deal with the EU for goods is a reasonable long-term aim, even if it wouldn’t remove all the frictions, especially in services, and non-tariff barriers that will come into play after Brexit.

Article 24 exists and is in use. But it isn’t a mechanism by which the extreme economic harm of a no-deal departure can be avoided.

It is time to put the idea to rest, before someone puts it on the side of a bus. – Bloomberg