Panic, but no evidence of shots fired, in London rush-hour alert

Police ‘responded in line with our procedures of a terrorist incident’

There was a “significant level of panic” on Oxford Street and at Oxford Circus Tube station as witnesses said they heard shots. Police "responded in line with our procedures of a terrorist incident", but found no evidence of gunfire. Video courtesy Charlotte Terry‏ 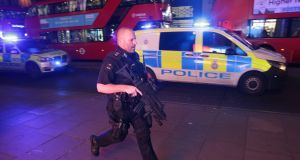 An armed officer running along Oxford Street as police respond to an incident in central London. Photograph: Daniel Leal-Olivas AFP/Getty

There is no evidence of shots being fired or any casualties on London’s busiest shopping street, police said, after responding to reports of gunfire.

There was a “significant level of panic” on Oxford Street and at Oxford Circus Tube station as witnesses said they heard shots. But after armed police responded to the area which was packed with Black Friday shoppers and rush-hour commuters, they announced nothing had been found and the Tube station has re-opened.

One woman suffered minor injuries in the crush as the station was evacuated. In a statement British Transport Police said: “At 4.37pm this afternoon, officers were called to Oxford Circus station following reports of gunfire on the westbound Central Line platform.

“Passengers at the station then self-evacuated the station onto Oxford Circus and Regent Street area of London.

“This caused a significant level of panic which resulted in numerous calls from members of the public reporting gunfire.

“Officers responded in line with our procedures of a terrorist incident; this included armed officers from British Transport Police and the Metropolitan Police. A full and methodical search of the station and Oxford Street was conducted by officers.

“At this stage, we are examining the circumstances of the incident which resulted in the station being evacuated. “During the station evacuation, one woman is believed to have sustained a minor injury.”

Earlier police tweeted: “If you are on Oxford Street go into a building. Officers are on scene and dealing. More info when we can”.

Greg Owen (37) from London, said: “I was next to the tube station and everyone started screaming and shouting and then a flood of people came up the stairs.” And a witness who only wanted to be known as Emma said she heard something which sounded like “three shots.” She said: “There were shots fired on Oxford Street and then armed police ran into me and my friend.