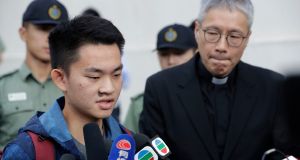 A Hong Kong murder suspect whose case sparked the city’s recent crisis has offered to return to Taiwan to hand himself in for the killing of his pregnant girlfriend, but he remained a free man on Wednesday amid a legal and political row between the financial hub and Taipei.

Chan confessed to the murder in Hong Kong but, as there was no formal agreement in place between Hong Kong and Taiwan, he could not be extradited to face justice. He walked out of a maximum-security prison in Hong Kong on Wednesday after spending the past 18 months in jail on money-laundering charges for using Ms Poon’s credit cards after her death.

Hong Kong’s chief executive, Carrie Lam, cited his case as an example why the city needed to introduce a wide-ranging extradition Bill to close legal loopholes. Her proposed law, which would have allowed for Hong Kong suspects to face trial in mainland Chinese courts, was a catalyst for mass protests that have morphed into a wider pro-democracy movement and resulted in violent protests over a five-month period.

Chan’s release came as media reports indicated Beijing was mulling replacing Ms Lam as chief executive early next year, and on the same day the unpopular extradition Bill was formally withdrawn in the legislative council.

Chan addressed a group of reporters after walking out of the prison gates on Wednesday morning. He bowed deeply and apologised to the victim’s family and the people of Hong Kong for the “worst mistake” that could not be reversed.

“I am willing, for my impulsive actions, things I did wrong, to surrender myself, to return to Taiwan to face sentencing and stand trial,” he said. “I hope this can make her family feel slightly relieved and allow [his deceased girlfriend] to rest in peace.”

He thanked his family for standing by him and he apologised to the public for the inadvertent role he has played in the worst crisis to plague Hong Kong in decades.

“To society and the Hong Kong people – sorry,” he said. He begged for forgiveness, bowed a second time, and left in a car as a free man.

Chan had planned to fly to Taiwan with a local priest to hand himself in, but that plan had to be aborted as Taiwan and Hong Kong officials engaged in legal wrangling, unable to agree on how to handle the complications of the case.

Taiwan suggested sending police to Hong Kong to arrest Chan and escort him back to Taipei, while Hong Kong officials said that would violate their jurisdiction and wanted the suspect to fly by himself. Taiwan has a warrant out for his arrest and claims he must be accompanied.

While Taiwan functions as an independent nation, China considers it part of its territory. In the detailed proceedings relating to the murder case, officials are consequently at odds over legal, jurisdictional and sovereignty issues, so it remains unclear if Chan will face trial in Taipei.

The case is the latest in a series of headaches for Ms Lam, who has faced widespread criticism for her handling of the ongoing crisis. Her removal from office would be unlikely to appease the protesters, however, who dismiss her as a Beijing puppet and are now intent on fighting for sweeping democratic reforms.