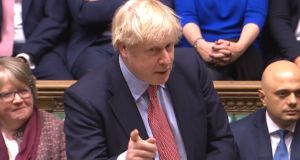 British prime minister Boris Johnson speaking to the House of Commons for the first time since his election victory. Photograph: UK Parliament via Getty

Boris Johnson has told MPs that he will end years of “deadlock, division and delay” over Brexit and find common ground to deal with other issues facing Britain.

Speaking in the House of Commons on the first day of the new parliament, the British prime minister said he would bring the Withdrawal Agreement Bill (WAB) back to the Commons on Friday.

“I can tell the House that, after three and a half years of wrangling and division, the government will do whatever we can to reach out across the House to find common ground, to heal the divisions of our country and to find a new and generous spirit in which we conduct all our political dealings with one another that will last beyond the immediate season of Christmas goodwill,” he said.

Downing Street confirmed on Tuesday that the WAB would include a provision prohibiting the government from seeking an extension to the transition period beyond December 2020. Mr Johnson would have to request such an extension by July of next year.

“Our manifesto made clear that we will not extend the implementation period and the new withdrawal agreement bill will legally prohibit government agreeing to any extension,” his official spokesman said.

“The PM made clear during the general election campaign that he would be aiming for a Canada-style free trade agreement with no political alignment.”

The pound lost the post-election gains it made against the dollar and the euro as it emerged that businesses could face a cliff-edge at the end of next year. Downing Street also made clear that “in all circumstances” Britain would leave the EU customs union and single market and that there would be no post-transition implementation period at the end of next year.

Scotland’s first minister, Nicola Sturgeon, said the result of last week’s election, which saw the Conservatives win south of the border while the Scottish National Party won 48 out of Scotland’s 59 seats, reinforced the case for a second independence referendum.

“74 per cent of votes in Scotland were cast for parties that either supported remaining in the EU or were in favour of a second EU referendum. 90 per cent of seats were won by pro-EU or pro-EU referendum parties. But regardless, we are set to be dragged out of the EU against our will. Such a democratic deficit is not just undesirable, it is also completely and utterly unsustainable,” she said.

“It is essential therefore that a future outside of Europe and governed by an increasingly right-wing Conservative government is not foisted upon Scotland. Instead, we must have the right to consider the alternative of independence. That is why, later this week, in line with repeated election mandates – reinforced once again on Thursday – I will publish the detailed democratic case for a transfer of power from Westminster to this parliament to allow for an independence referendum that is beyond legal challenge”.