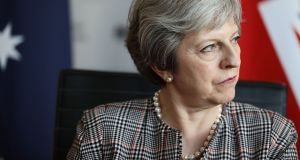 Theresa May: The prime minister has ruled out remaining in a customs union with the EU after Brexit. Photograph: Jack Taylor/ Getty Images

A powerful cross-party group of MPs are set to force a vote in the House of Commons next week calling on Theresa May’s government to seek to remain in a customs union with the European Union in order to avoid a hard border in Ireland.

The motion, which has been tabled by 10 select committee chairs including Conservatives Nicky Morgan and Sarah Wollaston, will be debated next Thursday.

A vote on the motion will be non-binding but the debate will increase pressure on the government to keep the customs union option alive following a massive defeat on the issue in the House of Lords on Wednesday.

The motion notes the importance of frictionless trade with the EU for British manufactures and “further notes that the free circulation of goods on the island of Ireland is a consequence of the UK and Republic of Ireland’s membership of the EU customs union”.

It recalls the British government’s commitment in last December’s joint report with the EU “to the maintenance of North-South cooperation and the all-island economy on the island of Ireland, that the Belfast Agreement implemented in the Northern Ireland Act 1998 should remain a fundamental principle of public policy, and to the continuation of unfettered access for Northern Ireland’s businesses to the whole of the United Kingdom internal market”.

In a joint article for HuffPost on Thursday, Ms Morgan and Labour’s Yvette Cooper said MPs had a responsibility to protect the peace process in Northern Ireland and the role of the all-island economy in strengthening the peace.

The prime minister has ruled out remaining in a customs union with the EU after Brexit, instead proposing two alternative models. The first, a “customs partnership” would see Britain collecting tariffs on behalf of the EU for goods entering the country en route to Europe and applying its own tariffs to imported goods destined for the British market.

There is some tension within the government between advocates of either model, with eurosceptics fearing that a customs partnership could lead to a customs union in all but name.

Next week’s vote comes ahead of amendments to a trade bill and a customs bill calling for Britain to remain in a customs union with the EU and will offer an indication of how many Conservatives are willing to break ranks on the issue.