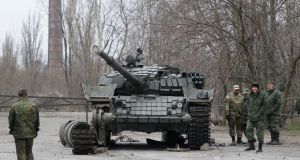 Pro-Russian rebels preparing a tank near Luhansk, Ukraine, for a “victory day” parade on May 9th to mark the 73nd anniversary of the then Soviet Red Army’s victory over Nazi Germany. Photograph: EPA/Alexander Ermochenko

Ukraine’s ecology minister has warned of the danger of a “second Chernobyl” if Russian-led separatists pursue plans to flood a coal mine where a small nuclear bomb was detonated in 1979.

Ostap Semerak called for international help to stop a potential “radiation catastrophe” as the United States also expressed concern over the mine and a key water facility in eastern Ukraine that has temporarily shut down after five workers were shot.

Soviet specialists conducted the underground explosion to free trapped gas at the YunKom mine in Yenakieve, 55km northeast of what is now the militant stronghold of Donetsk, and pumps have kept the blast zone relatively dry ever since.

Separatist officials insist that pumping and special monitoring are no longer necessary, however, citing local and Russian experts who say radioactivity levels in the mine are normal, and that flooding it would pose no threat of contamination to the Donbas region’s water table.

“What the militants are playing at is nothing other than terrorism and political blackmail,” Mr Semerak told members of the European Parliament in Strasbourg.

“Our joint task with international partners is to prevent a second Chernobyl in Donbas,” he said, referring to the atomic power station north of Kiev that exploded in April 1986, showering much of northern Europe with radiation.

Earlier this week US state department spokeswoman Heather Nauert wrote on Twitter: “Plans by Russian proxies to flood the abandoned YunKom coal mine... could threaten drinking water of thousands of Ukrainians in Russia-controlled eastern Ukraine. We urge Russia and its proxy authorities to act responsibly.”

Four years of fighting in Donbas have killed more than 10,300 people, displaced 1.6 million and ravaged an industrial region of mines, metal works and chemical plants, creating the potential for a long legacy of environmental problems.

In a 2017 report on the environmental impact of the war, the Organisation for Security and Co-operation in Europe (OSCE) said that YunKom “poses a singular threat”.

“Any present destabilisation of the mine via flooding could release up to 500 cubic metres of radiation-contaminated mine waters into the ground water table,” the OSCE said.

The conflict frequently disrupts water supplies through Soviet-built canals and pipes that criss-cross the front line, and which workers take considerable risks to maintain and repair after damage by shelling.

The Donetsk water filtration plant, which sits right on the frontline, shut down again on Wednesday after five employees were wounded when their bus came under fire the previous day.

Hundreds of thousands of people in government and militia-held territory receive water from the plant, which is often struck by shells despite the presence there of chlorine and other hazardous chemicals.

“The chlorine is being washed out so it doesn’t stay in the pipes. They are halting the pumping station,” said Alexander Yevdokimov, acting head of the Donbas Water company. “It doesn’t mean we have shut it down forever, but we simply need security guarantees for our employees.”

Ms Nauert said the US urged “all forces to withdraw from positions around the Donetsk filtration station and other critical civilian infrastructure”.