Politicians insist India had the internet thousands of years ago 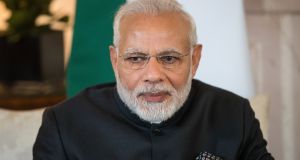 Senior Indian leaders from prime minister Narendra Modi’s Hindu nationalist Bharatiya Janata Party (BJP) claim that the internet was in use during prehistoric times of the Mahabhharta, the legendary Sanskrit war epic in which good defeats evil.

“Internet and satellite communication had existed in the days of Mahabharata,” Biplab Kumar Deb, chief minister of India’s northeastern Tripura state and a BJP politician, said on Wednesday at a regional workshop on computerisation.

Defending his claim, he asked: “How else could Sanjaya [the charioteer of King Dhritarashtra in the heroic battle] give a detailed account and description to the blind king about the battle of Kurukshetra? It means internet was there; the satellites and that technology was there in this country at that time.”

He said in the West many claimed the internet was their invention, but it was actually ancient Indian technology.

“My country had the technology years ago, which no country had. I am proud of that, and I think every Indian should feel proud. I want to repeat that we should accept the truth, and should not get confused.”

This is not the first time that BJP leaders have made tall claims with regard to science and technology. In January, Satyapal Singh, federal minister for higher education, was criticised by scientists for demanding that Charles Darwin’s Theory of Evolution be removed from school curriculums because no one “ever saw an ape turning into a human being”.

He said no books people had read or tales told to them by their grandparents had mentioned such a thing.

Mr Singh, who holds a postgraduate degree in chemistry, said he was speaking as a “man of science”.

In 2014, Mr Modi, the prime minister, told an audience of doctors and scientists in Mumbai that plastic surgery, genetic science and stem-cell study existed thousands of years ago in ancient India. He said that was how the Hindu god Ganesha’s elephant head was attached to a human body, and how the warrior god Kartikeya was born outside his mother’s womb.

Since the BJP came to power four years ago other party supporters and members have claimed that motorcars, aircraft and space vehicles capable of inter-planetary travel existed millennia ago. Warring kings even left behind a helmet on Mars, which was discovered by Nasa scientists, it had been claimed.

The head of the Indian Council for Historical Research, Y S Rao, who was appointed to that post by the BJP government in July 2014, has stated that fables from the Mahabharata and the Ramayana, the other major Hindu epic, were truthful historical accounts and did not merit questioning.

1 At least eight shot dead in German town of Hanau
2 A Russian cruiser with ‘cannibal rats’: What other ‘ghost ships’ could be out there?
3 DUP pleads with UK to reduce salary threshold for migrant workers coming to North
4 ‘If all the immigrants go back, who will work in the meat factories and do the crap jobs?’
5 Jewish council dismayed at Sinn Féin TD’s ‘unacceptable’ tweets
Real news has value SUBSCRIBE