US military deployed near Saudi capital as regional tensions spike

More than 500 US soldiers, airmen returning to base at invitation of King Salman 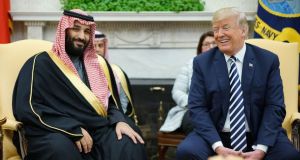 US troops, war planes and missile defence batteries are being deployed at the Prince Sultan air base south of the Saudi capital Riyadh as regional tensions spike between Tehran and the Trump administration.

More than 500 US soldiers and airmen are returning to the base at the invitation of King Salman, who seeks the shelter of a US military presence in the kingdom if war erupts between Iran and the US and its allies.

Finalisation of the deployment agreement coincided with last Friday’s seizure by Iranian Revolutionary Guards commandos of a British-flagged oil tanker in the Strait of Hormuz, through which 20 per cent of the world’s oil is exported.

The US Central Command, which is responsible for US military operations in the Middle East, announced: “This movement of forces provides an additional deterrent, and ensures our ability to defend our forces and interests in the region from credible, emergent threats.” The base, located in the desert far from the Yemen conflict and Gulf uncertainties, provides Washington with a foothold in the kingdom 16 years after US troops departed.

Equipped with fast-food outlets and swimming pools, the facility hosted US bomber and fighter squadrons during the 1991 US-led war to drive Iraqi forces from Kuwait. After 19 US servicemen were killed in 1996 near Dhahran by Saudi Shia bombers, most US forces in the kingdom shifted to the base. Subsequently, it was the air operations hub for the US wars on Afghanistan and Iraq until 2003 when Central Command shifted to Qatar’s al-Udeid air base.

Since traditionalist Saudi clerics and tribesmen deeply resent the presence of foreign, especially US, forces in Arabia near the holy cities of Mecca and Medina, the Prince Sultan base is ideal as it is far from population centres where soldiers could mix with citizens. Nevertheless, the return of US troops could further roil conservatives opposed to the modernising policies of Saudi crown prince Mohammed bin Salman, a close US ally.

Al-Qaeda’s founder Osama bin Laden, a Saudi citizen, used as a recruiting tool the 1990-91 US deployment in the kingdom of half a million troops to wage war on Iraq. Bin Laden argued the US presence amounted to occupation by Christian crusaders and called for the overthrow of the Saudi monarchy and the liberation of Palestine. Of the 19 men who took part in al-Qaeda’s September 2001 attacks on New York and Washington, 15 were Saudis.

During the US occupation, al-Qaeda rose in Iraq and spawned Islamic State (also known as Isis) and Hay’at Tahrir al-Sham. While Islamic State’s caliphate has been erased, thousands of jihadis, including Saudis, have scattered across the region while Tahrir al-Sham rules Syria’s northeastern Idlib province. Al-Qaeda-linked jihadis hold a grudge against the US for killing bin Laden and taking part in the wars against Islamic State and the Afghan Taliban.

It is ironic that Riyadh has cracked down hard on Sunni and Shia domestic militants while international Sunni jihadis fight under the banner of Saudi Wahhabism, the kingdom’s ultra-conservative theology.