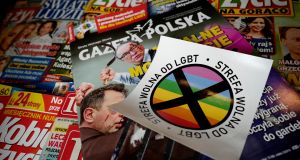 Polish LGBT groups are holding solidarity marches and events in 30 cities on Saturday to protest growing hate speech and violence against their community.

Meanwhile a leading Polish magazine could face a fine for ignoring an injunction to halt distribution of an “LGBT-free zone” sticker with its latest edition.

The injunction against Gazeta Polska’s weekly edition was issued on Thursday in Warsaw district court to Bartosz Staszewski, a campaigner for lesbian, gay, bisexual and transsexual rights.

He complained the sticker – a crossed-out rainbow symbol – infringed his personal rights as a gay man and is part of a wider campaign – supported by the government and the Catholic Church – to demonise the LGBT community.

“These stickers remind me of the worst things I read in the history books against Jews in the 1930s,” he said.

Last Saturday Mr Staszewski was one of the marchers in the first equality parade the northeastern city of Bialystok, attacked by hooligans with bottles, stones and fireworks.

“Online people are planning to come to future marches with baseball bats, so I worry someone will be hurt badly,” he said.

Nationalist groups and football hooligans use online groups to agitate against LGBT community, and to meet up for so-called “faggot hunts”.

On Thursday, a heterosexual journalist in Wroclaw was beaten and sustained a broken nose after he objected publicly to homophobic graffiti. Earlier in the week a Polish fashion designer was mistaken for gay and also beaten up.

Poland’s government has condemned the violence against homosexuals while the ruling Law and Justice (PiS) party steps up attacks on LGBT “ideology”. PiS leader Jaroslaw Kaczynski has described this as an “attack on the family” a “threat to Polish identity, to our nation, to its existence and thus to the Polish state”.

The anti-LGBT campaign ahead of an autumn election follows a similar campaign in 2015, describing migrants as a threat to Polish security and public order.

Gazeta Polska, a supporter of PiS and regular recipient of state-agency advertising, has refused to comply with Thursday’s injunction to remove the sticker from its magazine. It justified the sticker saying LGBT rights “have all the features of a totalitarian ideology”.

Last January the mayor of the northern Polish city of Gdansk, Pawel Adamowicz, was stabbed in public after being targeted by PiS and government-controlled public television. It accused the pro-immigration politician of being a Nazi, a communist, and “anti-Polish”. His death shocked Poland and triggered calls for more moderate language in public discourse.

“But there were no lessons learned by politicians,” said LGBT campaigner Bartosz Staszewski. Last week he successfully sued a politician for hate speech in Lublin, and has encouraged others to do the same.

Warsaw law professor Jakub Urbanik has taken a court case against a Polish politician for describing Taoiseach Leo Varadkar as a “pervert” on television. “There is a clear pattern,” said Prof Urbanik. “You’ve got the words – by politicians, church and mass media – and it ends in public acts of violence.”