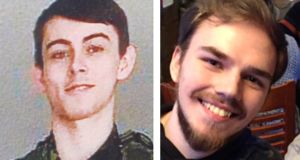 Kam McLeod (19) and Bryer Schmegelsky (18), who are suspected in relation to three murders. Photograph: British Columbia RCMP/Handout via Reuters

Canadian police believe that two men charged with the murder of a Vancouver university professor – and suspected in the murder of a young Australian-American couple – are still on the run in the inhospitable surroundings of a remote town in northern Manitoba.

A burned-out Toyota Rav4 known to have been driven by Kam McLeod (19) and Bryer Schmegelsky (18) was found near the community of Gillam on July 23rd. Royal Canadian Mounted Police (RCMP) spokesperson Julie Courchene said on Thursday that the police force believes the two are still near the town.

Ms Courchene also said the RCMP has confirmed two sightings of the pair in the Gillam area, both prior to the discovery of the car. The pair have managed to lay low since leaving the vehicle, with no further confirmed sightings.

Using dogs, high-tech equipment and multiple police forces, the RCMP is continuing to look at a “large area” around the town, she said.

“This is very challenging terrain . . . there’s lots of dense bush, forests, swampy area,” Ms Courchene said. Such an inhospitable landscape takes time to search – but also time to traverse, if that’s what Schmegelsky and McLeod are doing.

No cars have been stolen from the town, Ms Courchene said, and the one road in and out of the centre is being watched. “Over the last 48 hours, we have received over 80 tips and we continue to remain vigilant,” she said.

Gillam, with a population of about 1,300, sits at the northernmost point reachable by road in the province.

The community is more than 2,000km from Highway 37 in northern British Columbia, where the body of Leonard Dyck (64) was discovered on July 19th near the burned-out remains of the first car McLeod and Schmegelsky were known to be travelling in.

Four days earlier, the bodies of Australian Lucas Fowler (23) and US citizen Chynna Deese (24) were discovered 500km away on the same highway.

McLeod and Schmegelsky were originally considered to be missing. On July 23rd, they were named as suspects in the Deese and Fowler murders. On July 24th, they were charged in absentia with one count each of second-degree murder in Mr Dyck’s case.