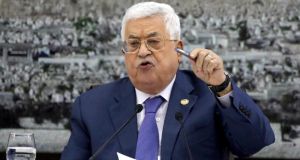 Palestinian president Mahmoud Abbas: 1We announce the leadership’s decision to stop implementing the agreements signed with the Israeli side.’ Photograph: EPA/STR

Palestinian leaders have suspended all agreements with Israel in protest over its demolition of Palestinian homes earlier this week in the Jerusalem-area village of Sur Baher.

“We announce the leadership’s decision to stop implementing the agreements signed with the Israeli side,” Palestinian president Mahmoud Abbas declared, in a passionate speech in the West Bank city of Ramallah.

A special committee convened on Friday to plan how to carry out the decision, which includes security co-operation between the two sides in the West Bank.

The decision came a day after the US blocked a move by Kuwait, Indonesia and South Africa to get the United Nations Security Council to condemn the house demolitions.

The demolitions heightened tensions between Israel and the Palestinian Authority (PA), which accused Israel of “ethnic cleansing” and a “crime against humanity.”

The action, which left 17 people homeless, was also condemned internationally, including by the European Union and Ireland.

In a statement earlier this week, Minister for Foreign Affairs Simon Coveney expressed regret that “once again” Israeli authorities were evicting members of a population which should be under their protection.

“The practice of demolitions and forced evictions is contrary to Israel’s obligations under international law,” he said. “These actions cause further suffering to ordinary Palestinians, destroying their livelihoods.”

Israel defended the Sur Baher demolitions, stressing that the action came after Israel’s high court of justice had ruled unequivocally that the buildings had been built illegally near the West Bank separation fence and were a danger to civilians and to the security forces.

Parallel to the decision to suspend the agreements with Israel, Mr Abbas reached out to Hamas, offering to end the dispute between the movement and his ruling Fatah faction. He appealed to Hamas to implement the reconciliation agreements it signed with Fatah. “My hand is still extended to Hamas for reconciliation,” Abbas said.

Hamas and the Islamic Jihad both released statements in the Palestinian press and on social media on Friday, in rare praise of Fatah.

“The US administration, through its bias in favour of Israel and attempt to pass the Deal of the Century, is providing a cover for Israeli violations against our people,” he said. “We have rejected this and will continue to do so.”

There was no official response from Israel to the Palestinian move but in the past Israel has warned that the PA has most to lose if security co-operation is suspended because without the almost daily arrests of Hamas and other militants, Fatah’s control over the West Bank would be undermined.

It is unclear what the Palestinian decision will mean in practice and whether it will lead to the Palestinians formally revoking recognition of Israel, a key element of the 1993 Oslo peace accords, which lay the foundations for Palestinian self-rule in the occupied territories of the West Bank and the Gaza Strip.