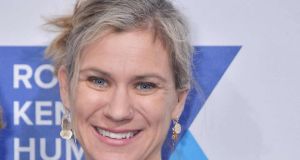 The body of Maeve Kennedy Townsend, the granddaughter of the late Robert F Kennedy, was recovered on Monday evening and the search for her son will continue, police said.

The daughter of former Maryland Lieutenant Governor Kathleen Kennedy Townsend (40), and her son, Gideon McKean (8), went missing on Friday after drifting out into the Chesapeake Bay on a canoe.

Charles County Dive and Rescue, one of the agencies searching for them, located Townsend’s body in about 8m of water, 4km south of her mother’s residence in Shady Side, Maryland, where the canoe was launched.

The Maryland Natural Resources Police said it would resume the operation on Tuesday to search for Townsend’s son.

The Anne Arundel County Fire Department had received a call last Thursday afternoon reporting that two people in a small canoe or kayak were drifting into Chesapeake Bay.

Rescuers were sent to the area and a search began. Several hours later, the empty canoe and a paddle were found. – Reuters