Taoiseach says: ‘We wish him a speedy recovery and a rapid return to health’ 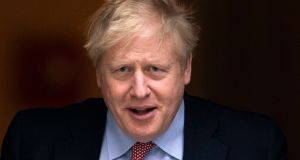 Boris Johnson remains in intensive care at a London hospital after a deterioration in the British prime minister’s condition since he was admitted for treatment for Covid-19.

“Since Sunday evening, the prime minister has been under the care of doctors at St Thomas’s Hospital, in London, after being admitted with persistent symptoms of coronavirus. Over the course of this afternoon, the condition of the prime minister has worsened and, on the advice of his medical team, he has been moved to the intensive care unit at the hospital,” a Downing Street spokesperson said.

“The PM has asked foreign secretary Dominic Raab, who is the first secretary of state, to deputise for him where necessary. The PM is receiving excellent care, and thanks all NHS staff for their hard work and dedication.”

Mr Johnson was moved into intensive care at about 7pm on Monday evening as a precaution in case he needed the aid of a ventilator and he was still conscious an hour later, sources said.

Mr Raab, who as Mr Johnson’s de facto deputy chaired a daily meeting about coronavirus on Monday, told a press briefing earlier that the prime minister was in good spirits.

“He’s in charge, but you’re right he will continue to take doctors’ advice on what to do next. We have a team that is full throttle, making sure that his directions and his instructions are being followed through,” he said.

Taoiseach Leo Varadkar made clear his concerns for the British leader in a statement on Twitter tonight. “@BorisJohnson is in our thoughts tonight. We wish him a speedy recovery and a rapid return to health,” he wrote.

Mr Johnson was admitted to St Thomas’s Hospital for tests on Sunday night, 10 days after testing positive for coronavirus. Downing Street initially declined to give details of the treatment he was receiving or to say whether he was suffering from pneumonia.

@BorisJohnson is in our thoughts tonight. We wish him a speedy recovery and a rapid return to health

Everyone in Ireland is tonight wishing @BorisJohnson well. This is a difficult time for the UK and it’s Govt. We in #Ireland wish the PM a speedy recovery. 🇮🇪 🇬🇧

Praying for the Prime Minister’s swift recovery tonight. @GSTTNHS has some of the finest medical staff in the world, and he couldn't be in safer hands.

Wishing @BorisJohnson all the best and a speedy recovery. My thoughts are with you and your family.

My thoughts and prayers are with @BorisJohnson and his family as he continues to receive treatment in hospital.

This horrific virus does not discriminate. Anyone can get it. Anyone can spread it. Please #StayHomeSaveLives

The deterioration in the prime minister’s condition comes as the coronavirus epidemic enters what UK health officials expected to be its most intense phase. The government has faced criticism for its initial reluctance to introduce strict social distancing measures and a low level of testing for the virus.

The number of recorded deaths in Britain from coronavirus fell for the second day in succession, with 439 new deaths bringing the country’s death toll so far to 5,373.

Chief medical officer Chris Whitty said it was too soon to consider how or when to exit the lockdown until it was clear when Britain would reach the peak of the epidemic, which is expected to be in about a week’s time.

“The key thing is to get to the point where we are confident we have reached the peak, and this is now beyond the peak, and at that point I think it is possible to have a serious discussion about all the things we need to do, step by step, to move to the next phase of managing this,” he said.

“But to start to have that discussion before we are confident that that is where we have got to, I think would be a mistake. We do not think we know for certain that the peak will be at the end of this week, and until we’re confident we are there, it’s too early.”

US President Donald Trump extended his well wishes to Mr Johnson, adding that Americans are all praying for his recovery.

“I want to send best wishes to a very good friend of mine and a friend to our nation, prime minister Boris Johnson. We are very sad to hear he was taken into intensive care today a little while ago.

“Americans are all praying for his recovery. He’s been a really good friend, he’s been something very special – strong, resolute, doesn’t quit, doesn’t give up.”

Mr Trump also said he had asked therapeutic manufacturers in contact with the US government to contact London. “We’ve contacted all of Boris’s doctors and we’ll see what takes place.”

Asked further about his suggestion that pharmaceutical experts were in contact with Mr Johnson’s medical team in London, he said: “They’re at the hospital. They have everything with them should it be needed.”

Asked what treatment he is referring to, he replied: “It’s a very complex treatment of things that they’ve just recently developed, which they have a lot of experience with having to do with something else.

“They have already had meetings with the doctors and we’ll see whether or not they want to go that road. When you’re in intensive care it’s a big deal.”

Mr Trump has previously touted the use of anti-malarial drug hydroxychloroquine as a treatment for coronavirus, though it has not yet been approved to treat Covid-19.

He further praised the British leader. “I found Boris to be a fantastic, warm, strong, smart guy. He loves his country. He fought like hell for his country. Intensive care is big stuff,” he said.