Responses to Covid-19 may be based on ‘biased’ studies 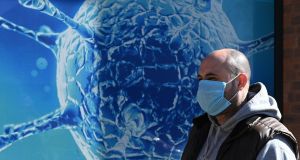 A man walks past the Regional Science Centre in Oldham, Lancashire. Photograph: Oli Scarff/AFP via Getty

The current approach to tackling coronavirus may be flawed and based on “overly optimistic” evidence from “biased and unreliable” studies, research published in the British Medical Journal has suggested.

European researchers examined multiple studies on the virus that causes Covid-19 and found some were poorly reported, had a high risk of being biased and included questionable recommendations.

The pandemic is considered to pose a significant and urgent threat to global health, with numbers of cases and deaths rising steadily in many countries.

The outbreak has put a strain on healthcare systems and focused the need for efficient early detection, diagnosis of patients suspected of the infection and prognosis for confirmed cases.

In light of this, a team of international experts appraised prediction models for diagnosis and prognosis of Covid-19 infection from published and pre-print reports.

These models aimed to predict the presence of existing infection, future complications and models to identify high-risk people.

The researchers examined 27 studies, with the vast majority (25) of studies containing data from China, one study using data from Italy and another study using international data from various countries. The data was gathered between December 8th, 2019, and March 15th, 2020.

The researchers rated all of the studies as having a high risk of bias, because they had a non-representative selection of control patients, they excluded patients who were still ill at the end of the study and they had poor statistical analysis.

The analysis also found that the quality of reporting in the studies “varied substantially”, and a description of the study population and intended use of the models was absent in almost all reports.

“Thus, their reported performance is likely optimistic and using them to support medical decision-making is not advised,” they said.

This raised concern that the “models may be flawed and perform poorly when applied in practice, such that their predictions may be unreliable”, the researchers stated.

“We also stress the need to follow methodological guidance when developing and validating prediction models, as unreliable predictions may cause more harm than benefit when used to guide clinical decisions,” they conclude.