Pair were questioned on Saturday after attending a police station voluntarily 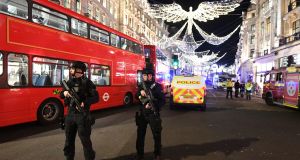 Authorities trying to determine what happened on Friday at Oxford Circus tube station, which saw armed police racing to the scene and several people injured during the mass evacuation. Photograph: EPA

Two men who handed themselves into police over an incident that sparked a mass evacuation at Oxford Circus tube station have been released without being arrested or charged.

British Transport Police (BTP) are investigating if any offence was committed after panic erupted in the packed station on Friday.

Several people were injured and nine were taken to hospital, including one with leg injuries, while armed police raced to the scene after receiving 999 calls reporting that shots had been fired.

Two men, aged 21 and 40, were questioned on Saturday after attending a police station voluntarily, following a media appeal, in which BTP said the incident was believed to have started when an altercation erupted between two men on the platform.

A spokeswoman for the force said on Sunday: “There are no criminal proceedings against them. They have not been arrested or charged.”

Officers are still trawling through CCTV footage and speaking to witnesses in an attempt to make sense of what happened, but no further suspects are being sought.

But about 90 minutes after responding, police said there was no evidence of any shots, casualties or suspects.

The station was reopened, cordons removed and the area returned to normal.