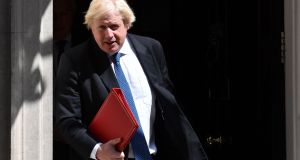 Theresa May’s proposal for Brexit has come under renewed attack from both wings of her Conservative party, as Downing Street sharply rebuked Boris Johnson for saying it would lead to inevitable victory for Brussels. The former foreign secretary used his Daily Telegraph column to accuse the prime minister of entering negotiations with the EU with a “white flag fluttering”.

He said she should abandon her Chequers proposal, which would keep Britain aligned to EU regulations for goods but not services, and instead seek a free trade agreement. Ms May’s official spokesman said the Chequers plan was the only credible and negotiable proposal which has been put forward for Britain’s future relationship with the EU.

“Look, Boris Johnson resigned over Chequers,” the spokesman said. “There are no new ideas in this article to respond to. What we need at this time is serious leadership with a serious plan and that’s exactly what the country has with this prime minister and this Brexit plan.”

A number of Eurosceptic Conservative backbenchers have promised to vote against any Brexit deal based on the Chequers proposal, which they complain would keep Britain too closely aligned with the EU. Some pro-European Conservatives are also unhappy, however, and former education secretary Justine Greening said on Monday that the proposal was more unpopular than the poll tax that led to Margaret Thatcher’s downfall.

‘Worst of all worlds’

“I was clear before summer recess that I thought it was the worst of all worlds,” she told the BBC. “The biggest problem for me is how people see this.

“The Chequers deal is now more unpopular with the British people than the poll tax was, and that is why it’s untenable to take forward. The prime minister cannot now waste the next two months shuttling around Europe pretending that nothing has changed, trying to land a deal that no one wants and has no prospect of actually getting through parliament.”

Another Conservative backbencher, Nick Boles, has called on the prime minister to abandon Chequers and to seek instead to remain temporarily in the European Economic Area (EEA), like Norway.

“We can’t get to Nirvana in one step,” he told the BBC on Monday.

Mr Boles, who campaigned to remain in the EU but is close to the pro-Brexit environment secretary Michael Gove, said the prime minister’s chances of getting her proposal through parliament were “very, very small, as close to zero as anything in politics”.

In his Telegraph column, Mr Johnson accused the EU and “parts of the UK government” of manipulating the issue of the Border in an attempt to keep Britain inside the single market and the customs union. He said the search for solutions to keep the Border open after Brexit had been occluded by myths.

“The tragedy is that as soon as the UK voted for Brexit, the Irish began working on those solutions – and were amazed, as the months went by, to find that the UK was not really interested,” he said. “We seemed lost in an eternal dither about whether really to leave the customs union and single market. We couldn’t make up our minds, for month after month.”

Mr Johnson said that the Chequers proposal would be a humiliating disaster for Britain and urged the prime minister to seek instead an ambitious free trade agreement.

“Of course that means fixing the Irish border problem,” he said. “It is fixable. The scandal is not that we have failed, but that we have not even tried.”