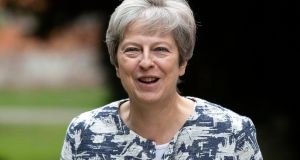 We are, belatedly, beginning to realise the damage that Brexit will do to the economies north and south of the Border. But there is another danger that is not as widely recognised. Brexit also threatens to undermine key elements of the Belfast Agreement, which brought an end to nearly 30 years of violent conflict in Northern Ireland

The agreement recognised that the roots of the conflict lay in injustice and discrimination and the lack of any way of redressing those grievances. It brought together and put in place a very powerful and sophisticated network of legislation and mechanisms for delivering equality and human rights even if the new powersharing political institutions did not work as well as intended.

The Human Rights Act 1988 brought the European Convention on Human Rights (ECHR) into everyday law in a more powerful way than in England and Wales. The Northern Ireland courts could strike down legislation by the new Assembly or overturn official decisions if they were in breach of the convention.

More powerful equality legislation and a legal obligation on public bodies to promote equality were introduced and a strengthened Equality Commission was set up to help enforce the legislation. A Human Rights Commission was established and the reformed police service was required to ground its policies and behaviour on the Human Rights Convention.

Much of the equality legislation was based on European Union law and was greatly strengthened in 2010 when the EU adopted a binding Charter of Fundamental Rights, which included all the rights protected by the ECHR and new rights to dignity and to asylum and good administration and stronger rights for children. It also included workplace rights, though their status was a little ambiguous.

This elaborate human rights and equality architecture goes well beyond the demands of the civil rights campaign which started in Northern Ireland 50 years ago this month and it protects the rights of a much wider group of people: women, LGBTI people, workers, members of ethnic minorities, people with disabilities, as well as the old traditional division of Protestant and Catholic, unionist and nationalist. And the final decisions about these rights were made by European courts, whose independence could be accepted by all.

But Brexit threatens to undermine them. The UK Withdrawal Act, passed by Westminster during the summer, proposes to end the role of the Charter of Fundamental Rights and the EU Court of Justice just as soon as the UK leaves the EU. And, although the Act proposes to retain most existing EU laws intact, British government ministers will have the power to repeal any of those laws that they don’t like, without consulting parliament.

As for the ECHR, the British Conservative party is committed to repealing the Human Rights Act and replacing it with a weaker “British Bill of Rights” under which the UK courts would not have to automatically follow the decisions of the European Court of Human Rights.

Prime minister Theresa May has said that they will not proceed with repeal of the Human Rights Act until after Brexit, but when or if Brexit does go through, it will remove the EU requirement that all member states must comply fully with the ECHR. A government largely driven by hardline Brexiteers would then be free to remove important human rights protections. The result might be the repeal not only of legislation about the conduct of the security forces etc but also labour laws that would get in the way of the unregulated, low-wage economy that many Brexiteers want.

The result might be the repeal not only of legislation about  security forces etc but also labour laws blocking the unregulated, low-wage economy many Brexiteers want

A joint report signed by May and Michel Barnier last December promised that there would be no diminution of human rights and equality protections in Northern Ireland as a result of Brexit. But when the EU negotiators tried to put this in binding legal language last March, the UK rejected it.

As we approach the crisis point in October when a UK-EU agreement must be reached, there is a serious concern that the human rights and equality provisions which are a baseline part of the Belfast Agreement could get lost in hectic final negotiations. That could have a very harmful effect in an already fractious political situation in Northern Ireland. Maybe it is time for a new civil rights campaign to defend the human rights and equality provisions introduced and protected by the agreement.

Michael Farrell is a solicitor and member of the Council of State and a former member of the Irish Human Rights Commission. He was one of the leaders of the civil rights campaign in Northern Ireland in 1968-1969